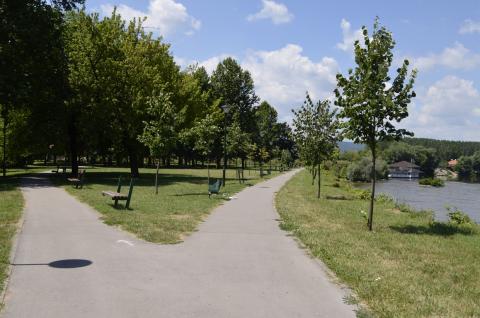 www.cuprija.rs
Description:
Ćuprija is located only 13 km away from Jagodina, and 145 km away from Belgrade. It lies at the confluence of the Ravanica and the Velika Morava (Great Morava) rivers. This is a typical Moravian town, with the population of about 22,000. Its main and longest street is named after Tsar Lazar. The name of the town of Ćuprija is, however, related to the famous Monastery of Ravanica. This church is located 15 km away from the center of the small town, on the E 75 highway. Ravanica is the legacy and the sepulchral church of Prince Lazar, where his relics are laid again. In the Great Migration of the Serbs across the Sava and the Danube rivers, the monks carried the body of the holy Prince Lazar to Hungary, St. Andrea, from where the body was carried to the monastery of Vrdnik in Fruška Gora Mount. During the Second World War, the relics were relocated to the Serbian Orthodox Church Temple in Belgrade, whereas since 1989, the relics have been returned to Ravanica. This legacy started being built in 1375. The thick walls with the seven towers enclose this edifice even today. It was destroyed by the Turks in 1389, then in 1436 and in 1438, and finally was left to decay in 1690. Later, the monks came to live in Ravanica again. The architecture of this monastery, which lives today as well, represents one of the foundations of the new, Moravian school of the Serbian mediaeval architecture. The combination of the temple of the inscribed cross basis, which had been built by the previous Serbian rulers, with the architectural traditions of the Holy Mount of Athos and the monasteries with the triconch basis built there. One of the novelties was the height of the church, too, particularly its willowy central domes. The exterior of the church reflects the ordinary Byzantine tradition, the layers of stone and brick, but was additionally rekindled by a big rosette above the western portal and the fields bearing the motif of a chessboard square under the domes. Also, the window frames are richly decorated with shallow reliefs. The most famous frescoes are the Mother of God with Christ in the aps of the sanctuary and the cyclus of Christ’s miracles. The painting in the narthex originates from the 18th and the 19th centuries. The Monastery of Holy Transfiguration, named after its ktetor, the reputed spiritual father Sisoje, is located 12 km away from Ravanica, on the Crnica River. His face is partly preserved on the fresco on which he holds the model of the church with his hand. The appearance of the church also relates it to the Moravian School of Architecture. In former times, it was decorated with the frescoes party preserved today. The part that is better preserved indicates a great similarity to the frescoes of Ravanica, which ware classified amongst the most beautiful painter’s works of Moravian Serbia.