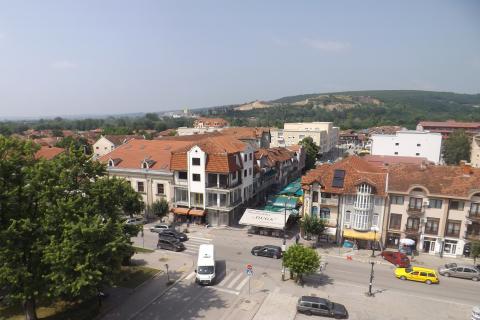 www.resava-tourism.rs
Description:
Despotovac is a small miners’ town, 130 km southwards from Belgrade. The Monastery of Manasija, Despotovac Spa, The Miners’ Museum in Senjski rudnik (The Mine of Senj) and the Resava river spring with its attractive waterfalls make this town exceptionally attractive. The Monastery of Manasija is one of the key sacral and cultural centers of Moravian Serbia. The Church of Holy Trinity inside the Monastery of Resava, better known as Manasija, was built as the mausoleum of one of the most significant Serbian rulers – Despot Stefan Lazarević, Prince Lazar’s son. Manasija’s exterior was done no sooner than in the 18th century. The whole of the monastery’s compound was frequently destroyed in numerous wars. The floor of rare beauty, made of white, green-blue and red marble by applying the mosaic technique, similar to the magnificent floors of Milutin’s Church in Hilandar, is what has remained preserved in a good condition from the old narthex. Stefan himself is painted on the walls at the moment of his receiving a spear and a sword from the winged angels. It is in Manasija that Stefan had the most famous manuscript school known as the Resava Manuscript School. The monastery of Manasija’s frescoes are among the most beautiful achievements of the Serbian middle ages. Beljanica mountain, with its highest peak of 1339 meters, separates the Resava from Homolje. The karst components caused the creation of a large number of round karst valleys, hollows, depressions and caves. The central plateau is bare, but, on the other hand, the slopes are covered with the beech and oak forests, occasionally of the jungle type. In the shades of big tree trunks, there are a lot of mushrooms, particularly edible boletes. There are a large number of cottages, whereas there are no permanent settlements. From the deep inside of Beljanica mountain, about ten kilometers eastwards from Manasija, you enter the worldwide known Resava Cave. This opening was discovered no sooner than in 1962, the reason for which is the fact that this beauty of nature is surrounded by thick plant cover. The Cave has three levels and is 2830 meters long. The upper two levels are open for visitors, and include a tourist path 800 m long, while the subterranean river flows through the lowest level. The cave is characterized by a temperature which is always the same – the unchangeable 140C.