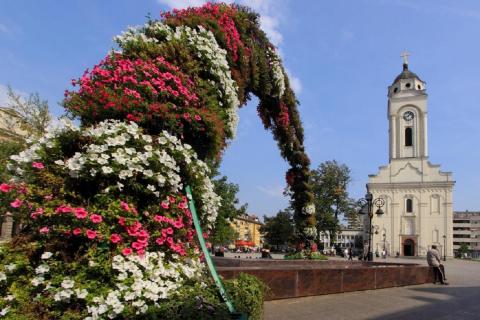 www.toosd.com
Description:
The town of Smederevo lies 46 km away from Belgrade, on the Danube River itself; it is reached via Grocka. In the Serbian history, it is remembered as the place the conquest of which marked the beginning of Serbia’s slavery under the Turks that lasted for three and a half centuries. Today, Smederevo is the seat of the region of the Danube River basin. The Fortress of Smederevo, a monumental edifice, the biggest built in mediaeval Serbia, still dominates the profile of the town today. The length of the thick walls of Smederevo was 550 m towards the Danube, 400 m towards the Jezava, and 502 m towards the mainland. The 25 powerful towers (6 in Small and 19 in Big Town) were placed along the thick walls. In Big Town, there was also a church whose foundations were not discovered until the beginning of the 1980s. The Church of St. George in Smederevo, built in the period between 1851 and 1855, is the first of those erected in Serbia by Andrej Damjanov, the builder from Veles. The contractors wanted the temple, as well as other significant buildings in the town, to be built on the model of Manasija. For that reason, Damjanov constructs a five-dome church here, a combination of the basilica-like type of building and the plan of the church with the developed inscribed cross. Above the narthex, there is a high-rising monumental baroque-classicistic bell-tower. This church was also quite significant for Smederevo for the reason that once the church was erected, the urbanization of the central part of the town began. The building of the District Court is also located in the center of the town. It was built on the northern side of the square between 1886 and 1888, based on the project by Aleksandar Bugarski. The building was constructed in the spirit of academism near the end of the 19th century, and has the elements of plastic decoration, which bear the stylistic characteristics of neo-Renaissance. In 1919, the Grammar School building was also built there. In the third decade of the 20th century, the building of the District Home, Pero Popović’s work, was also built. On the building’s cornice, above the main entrance, the four statues personifying Justice, Order, Science and Culture are placed. It is interesting to pay a visit to the summer house of the Obrenović Family dynasty and the Golden Hill Villa on Plavinac, with its vineyards. Even outside Serbia’s borders, this town is also known for its wine tradition. Grapevine, which is grown on the slopes along the Danube river, was brought to these territories in the third century by the Roman Emperor Probus. Every year, near the end of September, Autumn in Smederevo is organized as an event dedicated to the picking of grapes and wine. In memory of the famous comedists Branislav Nušić, who spent one part of his life in Smederevo, The Days of Nušić are organized every April, as the competition of theater groups performing his comedies.
Audio record: