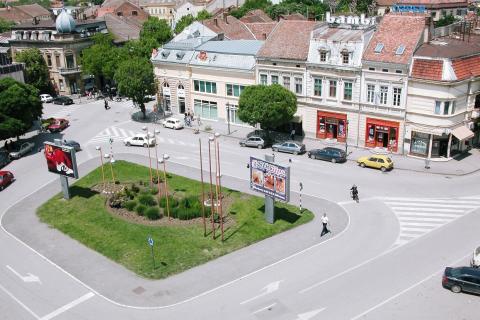 www.topozarevac.rs
Description:
The town of Požarevac is located at 80 km away from Belgrade. It is the crossroads of the roads to Homolje and Djerdap. It is mentioned for the first time in Prince Lazar’s charter as the village of Puporače. This town, the center of the District of Braničevo, is surrounded by the town of Veliko Gradište in the east, Malo Crniće and Žabari in the south, Smederevo in the west and, in the north, across the Danube River, by the municipalities of Kovin and Bela Crkva. Požarevac can be reached by rail, too, because the railroad Belgrade-Bor-Zaječar passes through it. In this region, the sports airport “Ljubiša Vučković” in Kostalac is also used. In 1889, the Prefecture and Court Building was built in the style of academism. The Orthodox Cathedral in the center of the town was built in 1819, as a single-nave neoclassicist building, whereas the iconostasis was painted by Nikola Marković in 1870. At the National Museum, established in 1895, there is an archaeological collection of the worldwide significance, from the ancient town of Viminacium. At the Gallery of Milena Pavlović-Barili, which is in the house of where the famous woman painter was born, her whole creative legacy, consisting of about 600 paintings, drawings and watercolors, is preserved. The Theater of Požarevac is known for the fact that, as early as in 1842, the first premier of Shakespeare (“Romeo and Juliette”) in the Balkans took place there. The Tulba Ethno-Park is one of the numerous and typical ethno-parks in Serbia. Its setting consists of the house lot, a well with a winch, a log house and the houses of the place of a scattered type of the 1880s. Miloš Obrenović built buildings to rest in for himself and his wife; later, in 1853, a big horse paddock, the first in Serbia, was established there. It was named after Miloš’s wife Ljubica – Ljubičevo. The traditional tourist-sporting event The Equestrian Games of Ljubičevo takes place at the first weekend in September every year. The All-Round Competition of Ljubičevo is particularly interesting – courageous young men riding their horses compete in spear cutting, courier riding, hitting the target with the javelin, the arrow and the mace. The waters around Požarevac offer extraordinary conditions for the development of tourism. This region is poor in forests, but it has the Plugovo Regional Nature Park, the nature monuments in Dragovac and Ljubičevo and the landscapes of special natural characteristics – Krivaja, Rastova kosa and Rastovača.
Audio record: