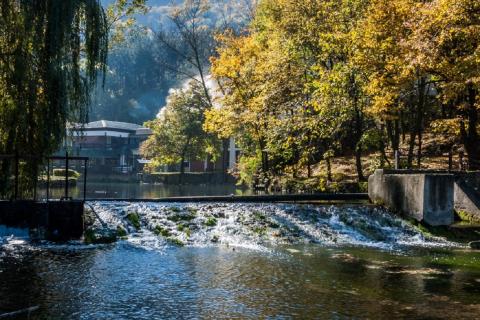 www.tozagubica.rs
Description:
Žagubica is located 120 kilometres away from Belgrade. The territory of this municipality occupies the upper part of the valley of the Mlava River and its tributaries, so it is naturally divided into two parts – foothills and mountain rim. The middle part is Žagubica basin whose lower part is of the average height of about 300 meters. The largest part of the basin rim to the west, north and north-east side is closed by the arches of the lower Gornjačke mountains (up to 825m) and the Homoljske mountains (up to 940m). Žagubica is a sparsely populated municipality. The population is mostly evenly distributed in about twenty settlements, out of which Žagubica is the largest. The Gornjak Monastery is located 26 kilometres away from Žagubica. It leans on a high cliff on its north side. It was founded in 1378-1381 by Prince Lazar with spiritual assistance of a monk, named Grigorije, who came here from faraway Sinai. The fresco-paintings were painted in 1847 and they are quite valuable. The relics of the co-founder of the monastery, St. Grigorije Sinait, are kept in a small chapel above the church. In a little cave, the remains of several frescoes from the 14th century are still visible today. However, the forms of pottery decorated with paintings, a variety of ornamental figures or floral motives, are typical for this entire region. Artistic expression in Homolje region can be found in the objects made of wood, hemp and the like.