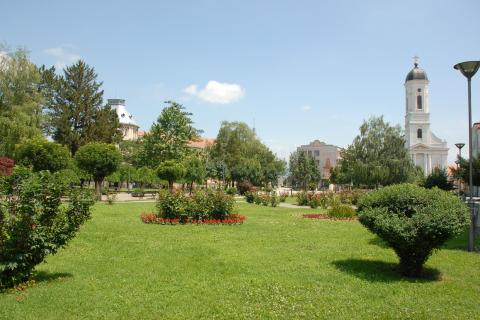 www.tovg.org
Description:
Veliko Gradište is located on the Danube, 114 km downstream from Belgrade. The town is a port for all the ships sailing along the Danube from the Black Sea ports to Central Europe. The Pek River flows into the Danube near Veliko Gradište. Due to its location, Veliko Gradište became an important export centre in the 19th century. The Church of St. Archangel Gabriel (1856) on the main square, located directly on the Danube bank, originates from that time. Next to the church, there is a building of Grammar school from 1879. Opposite the church, closer to the river, there is a beautiful building of the City Hall. In the park, beneath the complex, there are memorials to the victims of the First and Second World War. This whole part of the town is called old Gradištanska caršija (bazaar). In a part of its flow through Gradište, the Danube reaches its width of up to 2.000 meters and is justifiably awarded a title of “the Danube Sea”. The most interesting to visitors is a variety of contents and facilities along the river. About three kilometres from the town centre there is Silver Lake, very popular not only with the locals, but also with the guests to Veliko Gradište. Once a branch of the Danube, the lake is today 14 km long, 100-300 m wide and 8-9 m deep. Between the Danube and Silver lake, there is the Island (Ostrvo), a wonderful, large river island. The tourist area "White Acacia" leans on the Danube bank and spreads all the way to the road to Požarevac to the south. The entire area is covered with acacia trees and crisscrossed by meadows and agricultural land as well as multiple channels. The picnic site Jaz is located a kilometre upstream from the confluence of the Pek River and the Danube. It is arranged for the needs of swimmers. At the confluence of the Pek, the construction of the ‘Djerdap’ hydro power plant and raising the level of the Danube formed a small bay which quickly became a habitat for various bird species, especially for migratory birds, that have their river island near Gradište and the village of Ram. They come here in autumn, from Central and North Europe as well as Northwest Asia, so that their largest concentration is in January. A few years ago, an international expedition identified, only at this place, about 136.000 specimens of 25 bird species. This place can be reached by a boat rented via hunting associations. Hunters have the opportunity to enjoy a hunting ground Ramski rit, at the hunting area of 18.000 hectares. Within this hunting area there are constantly cultivated species such as deer, wild boar, rabbit, pheasant and partridge, and, as to predators, foxes and jackals come to the hunting ground from time to time. A cycling route, EuroVelo 6, on the territory of Veliko Gradište follows the road Golubac - Gradište - Zatonje - Ram. Near the village of Ram, on the banks of the Danube, there is a cable ferry provided for the transport of cyclists to the other side of the river, i.e. to the territory of Vojvodina. The Nimnik Monastery, known as the Marijanski Monastery and located 2 km from Kurjače village, is dedicated to the Transfer of St. Nicolai’s relics. The old monastery, dating from the mid-14th century, was the property of the old Ravanica monastery and his patron is considered to be Bogoslav, a Duke of Prince Lazar. Later, it was destroyed to the ground by the Turks, and renovated by Prince Miloš. Today it is a nunnery.