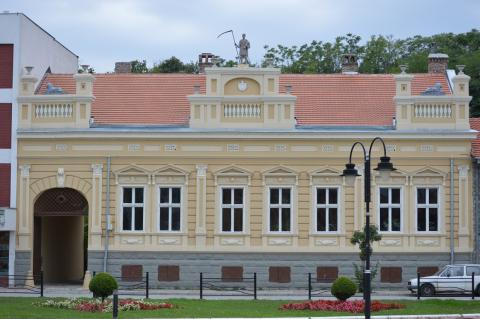 www.togolubac.rs
Description:
Golubac is located on the Danube River, but it resembles a town at the seaside. It’s no wonder, since the Danube, near this town, is even six kilometres wide. It is placed on the Belgrade-Kladovo road and is 130 km away from the capital. It is best known for its fortress – Golubački Grad, situated on the inaccessible cliffs over the Danube. It was built in the 14th century in order to control both sailing on the river and the hinderland, and Stefan Lazarević was its ruler. History says that Duke Jeremija sold it to the Turks at the price of 12.000 ducats. It has got nine towers with the highest one located on the highest hill. The Golubac fortress is protected and declared a cultural property of utmost importance. The National Park ‘Djerdap’ starts right here as well as the Natural reserve ‘Golubački Grad’ with its characteristic formations of lilac, hornbeam, downy oak and beech and diverse fauna as well. Golubac is extremely interesting to tourists throughout a year. Hunting jackals from the sands is an event held in January, Hunting encounter with wolf is held in February, Perch Days take place near the fortress in May, and at the end of June there are Dog Exhibition and Ethno Festival held. In July, there are various events within the manifestation ‘Danube’s Fair – Serbian Treasure’, and ‘Pot of Golubac’. ‘Ethno Parliament’, kayak regatta and sailing championship. The Fair in Golubac is held on the day of the Dormition of the Mother of God, and in the late September there is a horse terrain race from Golubački Grad to the Tuman Monastery. For water sport lovers, there is a beach volley championship as well.