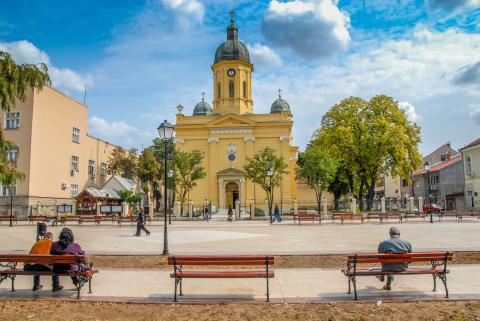 www.toon.org.rs
Description:
Negotin is located 250 kilometers away from Belgrade and it is a seat of Negotinska Krajina, the region on the border of Serbia, Romania and Bulgaria. Negotin is located 70 km away from the state border with Romania and 13 km from the Bulgarian border. The old core of Negotin includes the bazaar area, but also buildings, monuments, fountains and the park nearby. It is a protected cultural property which includes: the birth house of Stevan Mokranjac, the residence of Duke Todorče – the oldest preserved town house in Negotin (now the Hajduk Veljko’s Museum), the building of the Pedagogical School from the 19th century, and the Holy Trinity Congregational Church from the 19th century as well. The Negotin Fortress is also famous and known as Baba Finka, built in the 14th century. Today, there are about 1000 hectares of vineyards on the territory of Negotinska Krajina. Among indigenous varieties, Bagrina, Začinak, Prokupac, black Burgundy and Smederevka are grown, but what makes Negotinska Krajina well known is, certainly, the famous Tamjanika. Nowadays, the wine cellar of the Agricultural School Bukovo is recognizable exactly by this wine. Negotinske pimnice (cellars) represent an ethnological complex of the wine cellars built in the late 18th and the early 19th century in several villages of Timok area. They, together with the old cemeteries in Rajac and Rogljevo, are protected cultural property. A traditional manner of vineyard growing, cutting, processing and wine producing as well as the altitude and ecologically pure environment were the ideal area and a good recipe for the top quality wines. The facilities in the wineries were made from hewn stones, partially buried to the depth of a meter and they are of large capacity (several barrels of 5000 littres each). Rajačke pimnice (Rajac’s cellars) are situated not far from the Rajac village. They were built in the mid-18th century, mainly from hewn stone. They are considered a unique attraction since they represent a real small stone town of wine or, as it is called – Serbian Saint Stefan. Some film directors could neither resist this unique ethnological complex, so that several national historical films have been produced right here. There are also cellars located near Rogljevo, Smedovac and Štubik, whereas the Tamnič village is known for a large and strong complex of cellars. Among the ancient sites in Krajina, we should mention Vrelo Šarkamen, a site from the late ancient era, and Ad Akvas, a Roman city, while near the Vratna Monastery, on the little mountain river Jabuka, clear and suitable for fishing, there are huge stone gates, Prerasti Vratne, made by nature. The first gate is called Big Prerast, the second is Small Prerast, and the third gate is called Dry Prerast. The entire complex of Vratna is surrounded by rivers and forests and represents one of the most attractive locations in this region. Stevanske livade are equal to the most popular air spas in Serbia, and they are highly appreciated by hunters as well. The hill Badnjevo, near Negotin, is a favourite resting place of the people from this area.