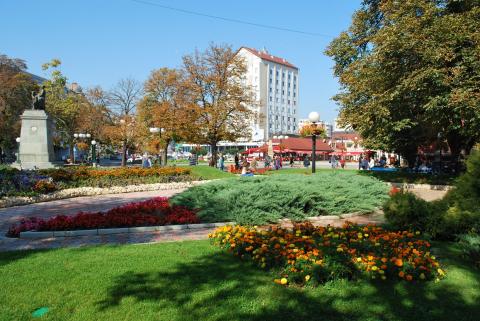 www.tozajecar.co.rs
Description:
Zaječar, a town at the crossroads and the very confluence of the Black and the White Timok, is located 250 kilometers away from Belgrade (E 75 and E 761 roads) and 11 kilometers away from the border with Bulgaria. Although the seat of Timok region and the largest town in the valley of this river, Zaječar is quite young compared to other places in the environment. It finally became part of the Principality of Serbia in 1833 and due to the diligence of its inhabitants and the generosity of its environment, which is covered with orchards and vineyards, it soon became known as the second richest town in Serbia, immediately after the capital city. Zaječar is the birth place of Nikola Pašić, Ljuba Didić, Zoran Radmilović and Hajduk Veljko. Svetozar Marković, a revolutionary and main instigator of socialist ideas in the Balkans, was also born here. Several old buildings in the town certainly deserve to be looked at. Radul-Bey's residence (Konak), a typical house of the local wealthy family from the early 19th century is located in Ljube Nešića Street. On the ground floor of this building one may buy souvenirs, while on the first floor there is a permanent exhibition "Old Zaječar". An old Turkish watermill originating from a somewhat earlier period is a national restaurant today. In Zaječar, one should definitely visit the National Museum, primarily because of the excavations from the excavation site of Felix Romuliana (Gamzigrad), the most important of which is the head of a statue of Emperor Galerius. While touring the town, one can also see very beautiful buildings of Grammar school and District offices (1911). On the main square, named after Nikola Pašić, there is a monument to the victims of the wars of 1912-1918, designed by the sculptor Antun Augustinčić. Today, Zaječar hosts numerous events, including the famous Guitar Festival, one of the most popular music events in Serbia, “Zoran Radmilović’s Theatre Days”, Philosophy Summer School, Hajduk-Veljko’s Days, etc. Suvodol Monastery, in the area of Selačka, on the mountain called Manastirska Glama, is in folk tradition associated with Prince Lazar. According to many, this monastery is reminiscent of Žiča monastery. Monastery of St. Peter and Paul, near Grlište, was one of the centres of the uprising in Crna Reka. 11 kilometers west of Zaječar, there is Gamzigradska Spa with its hot springs and sports facilities, and 8 kilometres north of the town there is a source of thermo-mineral water, Nikoličevo, as well. Although the examinations have proven the healing properties of the water in Nikoličevo, there has been no sanatorium built yet. However, many people visit this spring and get use of its healing properties. In the municipality of Zaječar there are no natural lakes, but there are three artificial ones. Grliško lake has been created for the town water supply, but only later became a popular picnic site as well. Rgotsko lake, on the other hand, was created by the groundwater and rainwater collected in the excavations of quartz sand near Rgotina village, 11 km away from Zaječar.
Audio record: