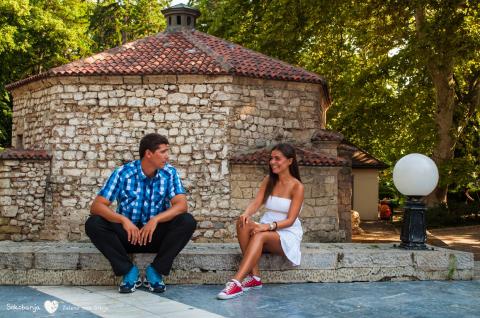 www.sokobanja.rs
Description:
Sokobanja is, via Aleksinac, which is 30 km away, connected to the road and railroad going from Belgrade (235 km away) towards Niš, Thessaloniki, Istanbul…It is the first ecological municipality in Serbia sustained almost exclusively by tourism and agriculture. It is situated on the bank of the Moravica River, between the Ozren and Rtanj mountains, at the altitude of 400 meters. Today, it is one of the most visited spa resorts, thanks to its thermo-mineral springs in addition to favorable climate. This Spa and its springs, with the tourist tradition lasting more than 150 years, are among the best in the country. The richness of mineral waters attracts those who need treatment (chronic bronchitis, bronchial asthma, psychoneuroses, high blood pressure, chronic rheumatism, languor, etc.), but it is also popular among healthy people who want to rest and walk through the unspoiled nature abundant in fresh mountain air. The Spa here was exploited far back in the ancient times, in the medieval ages, during Turkish reign… However, Sokobanja experienced its rapid development thanks to Prince Miloš Obrenović. As elsewhere, where he wanted to assign a place some importance, Miloš first built his residence here, renovated the temple and hamam and built his Fountain nearby the town. Thus, nowadays, you can see the buildings from that time in the centre of the Spa. The wonderful Turkish hamam is still in use, and visitors may also see the Miloš’s residence (Konak). A small church of a central plan from 1884, surrounded by old villas, is also significant, as well as, the local Heritage Museum, located in an old facility typical of this region. The town was named after the fortress Soko Grad (Falcon Town) which is located 2 km away from the centre of the Spa, upstream the Moravica River. It is situated on a high cliff and it was built in the late Medieval ages onto the Roman ruins. Although the entire Sokobanja looks like a huge park, its most beautiful part is a forest called ‘Čuka II’. On the slopes of the Ozren mountain, there are two sanatoriums, and Ripljanka waterfall, the highest one in Serbia, is nearby. Also, there is an artificial lake Bovan, which is considered to be the richest in fish in Serbia. The thermal mineral springs of Sokobanja are among the most radioactive springs in our country. There is a total of six springs of this kind. The water temperature ranges between 28 and 450C. The generation of radioactive gases is great, so that each visitor is constantly exposed to mild inhalation which is beneficial to respiratory organs and the entire organism as well. There are springs Sonda Park, ‘Preobrazenje’ spring, Banjica I bath, Banjica II, Pijaca, etc. Many important representatives of Serbian science and culture spent their time here. It is said that the Nobel Prize winner, Ivo Andrić, used to come here every year and it is where he began his most famous novel “The Bridge on the Drina”. Stevan Sremac, whose works celebrated the south of Serbia, not only visited this town, but he spent his last days here. The famous comedy writer, Branislav Nušić, a regular guest to the Spa, created a famous slogan “Sokobanja, Soko town, you come here old and leave young” and released it via a local photographer seventy years ago. Here came and later wrote about it in their works the writer, Isidora Sekulić and the geographer, Jovan Cvijić. There are many tales and legends related to the places near Sokobanja, such as the Holy Virgin with Christ whose image is outlined on a cliff of Ozren, then, there is a small Armenian church of the Holy Archangels deep in the mountain, and the Caves of Hajduk Veljko above the path through the forest towards the Soko grad. The Church of the Dormition of the Mother of God, near Sokobanja, has got extraordinary frescoes displaying Jesus as a child, a youngster and a mature man. It is also beautiful to visit mountainous terrains close to Sokobanja, the picnic site Lepterija (from Greek: Liberation), as well as anything in the offer of the villages such as Jošanica which has its own thermal springs. There is also an unusual fountain with the water coming from six different thermal springs.