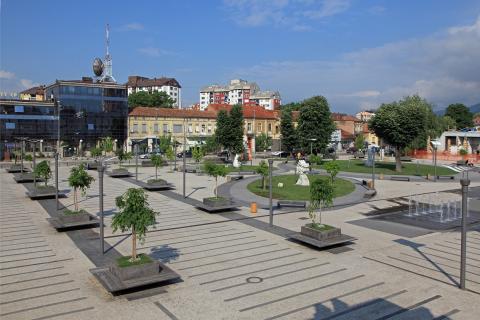 www.topirot.com
Description:
Pirot is located almost in the very centre of Balkans, in the middle point between Pannonia depression in Podunavlje and Trakia depression on the very edge of Europe, on the shortest road to Asia. It is one of the largest municipalities by its surface, positioned in the Nišava river valley. The first historic source, in which Pirot is documented as a town, is a Roman map from 4th century, known as Tabula Peutingeriana. An ancient settlement on the location of current town was called Tures, meaning towers in Latin, and its purpose was the control and defence of the main road in this part of the Empire. Travellers could find a place to sleep, rest and change horses or coaches there. Between the 5th and 15th century there is no mention of Tures anywhere, so this period is completely unknown, but there are abundant documents after the 15th century. Initially the town was named Pirgos, replacing the Latin name with the Greek name (with the same meaning), which later led to the Serbian name Pirot. Various armies conquered this town. In the 12th century the Pirot area was a part of Stefan Nemanja’s state, as evidenced by the existing monasteries in its surroundings. It was liberated from the 5 centuries long Turkish slavery in 1877. Pirot fortress, of which the local population believes was the property of Duke Momcilo, hero of folk epic poetry, therefore called Momcilo’s town, is located on the hill above the town. This fortress-town was used since it was built (14th century), till the end of WW II. The Nišava River divides Pirot into two parts. Pazar is located on the left bank of Nišava, and was once inhabited by Turks and Serbs, while the right bank, called Tijabara, was inhabited exclusively by Serbs. There are old orthodox churches there, from the Turkish times, in both parts of the town. The one built in Pazar is the older, built in 1834, and the one in Tijabara was built in 1869. It is interesting that there are several icons, considered to have healing powers, in both churches. The Hristic house, dated 1848, one of the most beautiful Balkan urban houses from 19th century, is located in Tijabara. Today, The Ponišavlje museum is located in this house, containing a bountiful collection of folk costumes, Pirot carpets and ceramics. Not far from the museum, there is another beautiful edifice from the same period – The White Cat – named after the inn that was formerly located there. There are several edifices worth seeing, located in the Srpskih vladari street, built after the liberation from Turks, the former part of Constantinople road, passing through the town. The Gymnasium (the school) built in 1907, is located on the corner of Srpskih vladara and Dragoljuba Milenkovica street, and so is the corner edifice of the Court, built in 1910. In the course of centuries, the most important artisan industry in Pirot had been carpeting. It is an original weaving activity, originated from the local inhabitants, the development of which was certainly influenced by Turks, and their interest in Pirot carpets. Particular contribution to the development of weaving in Pirot was derived from sheep breedeing, due to the exquisite quality of wool. Pirot carpet thoroughly differs from the Persian carpet, as it is smooth on both sides and its ornaments are always geometrical, with strong colour contrasts and the dominance of red colour. The ornaments have their specific names – doves on poles, star, roses, wreaths, bombs, bunches… The workmanship of Pirot carpets is very demanding; they are produced manually, in a sitting position, on the so-called Pirot loom.