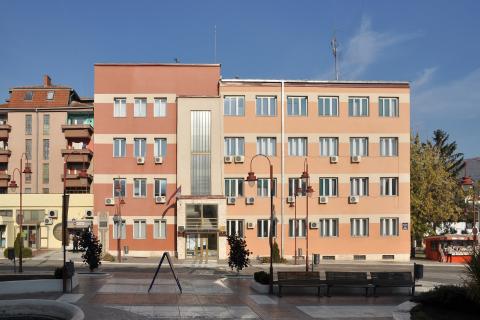 http://www.todimitrovgrad.org.rs/
Description:
Dimitrovgrad is located only five kilometres from the border with Bulgaria. This town changed its name many times, most recently after the WW II, when it became Dimitrovgrad, replacing Caribrod (the imperial ship). Its picturesque environment, along with numerous cultural historical sites in its surroundings, make this small town very attractive. One of the sites is a Church of the Birth of Holy Mother, built in 1892 and reconstructed in 1997. A small Church of Holy Dmitri, also known as Manastirce, is also located in the immediate vicinity of the town. It was renovated in 1996, and a winter sports path was constructed in its immediate proximity. This location is a favourite field-trip site for the inhabitants of Dimitrovgrad. 15 kilometres from Dimitrovgrad, in the river Jerma valley, the Holy John the Theologian monastery, also known as Poganovski Monastery, is situated. It was built by the end of the14th century, during the final years of Serbian independence, in the period when, due to the Turkish invasion, territories of Serbian rulers were disappearing one by one. The monastery was constructed in the Moravian tradition, built from sandstone and limestone. None of the theses regarding the potential ktetor of the monastery are substantiated by evidence. In the international circles of Bysantinists and connoisseurs of art, it is well known for its icons. The most special and the most famous icons are Miracle in Latom and Lamentation of Christ. John the Theologian monastery is under the state protection since 1949, and it is on the UNESCO World Heritage List since 1979, as a cultural treasure of great importance.