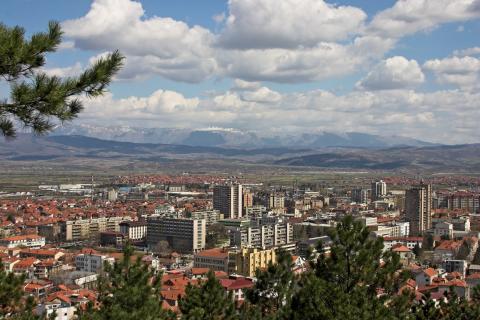 www.tol.org.rs
Description:
The town of Leskovac is located on the river Veternica, near to its estuary into South Morava river. It borders with the Doljevac, Gadžin Han, Vlasotince, Vranje and Kosovska Kamenica municipalities. It is 45 kilometres far from Niš, and 298 kilometres from Belgrade. By the mid 12th century, Stefan Nemanja acquired this territory as a present from the Byzantine emperor Manojlo Komnin. The Turks conquered the town in 1454, and in the 18th century it became an important trading town; due to this, the Turks transferred the seat of the district administrative unit there. Later, after the liberation from Turks, in 1877, the town went under a sudden transformation. Due to growing hemp and manufacturing hemp products, Leskovac started its industry, mostly focused on the textile production; between two wars, this town was also called Serbian Manchester, and products from Leskovac were sold on remote world markets. Although the major part of the town centre was reconstructed after the modernistic architectural style after the WW II, there are still certain edifices in the main street reminding of Leskovac’s golden era by their size and beauty. The old Šop-Djokić house with its wide yard is located in the Liberation Boulevard. It is a beautiful example of urban architecture from the 19th century, while today, it houses the office of Leskovac Toruist organistion. The Old and the New church are located in the neighbourhood of the Šop-Djokić house. The old church, Odžaklija Church, built in the beginning of the 19th century, has a very interesting history. Since the Turks didn’t give permission to the local population to build a church on that spot, it was registered as the construction of a house for a priest. To make it credible, they added a pretence chimney to the church. Six stairs lead under the church arcades, which is how deep the church was dug into the ground. The interior is very dark, because the light only comes through several small windows. A new church is located next to it, complete opposite in its appearance from the architectural perspective. This is the monumental Orthodox Cathedral of the Holy Trinity, the patron-saint of Leskovac, built after the model of Gračanica Monastery. It is a 5-dome edifice with beautiful decorations inspired by various styles of Serbian medieval heritage, and its construction was completed in 1931. Leskovac surroundings are a real gift of nature, with two mountains, Kukavica and Radan. The nearest excursion site, Pasha’s fountain, can be reached via Bojnik. Babička gora is rich in game, and Brestovica Lake (lake Radansko) is brimming with fish. The Barje Lake on Veternica, at the foot of Kukavica mountain, is 1 kilometre wide and 9 kilometres long. Leskovac surroundings are rich in historic cultural heritage. In almost every village artefacts of the past have been found, dating from Neolithic period to medieval times; for example, the Skobaljića town on Kukavica, above the Vučjanka canyon. Leskovac inhabitants confirmed their choice of developing textile industry by establishing a Textile Industry Museum in Strojkovac, on the Leskovac-Vučje road. The Electric plant, built in 1902, nowadays a museum, is a beautiful edifice on the Vucjanka river, and it still produces electricity. The Temple of Saint Parascheva is located in Rudare, and the time of its construction is unknown; also, parts of early-Christian basilica are preserved. The Unknown Heromonument and an impressive Monument to victims and freedom-fighters killed in combat during WW II are located on Hisar, the fortress-hill above Leskovac. Production of paprika is a Leskovac tradition. However, Leskovac is more famous after its famous grill – skara. This specialty may be tasted the whole year long, but the most interesting way to do it is to visit the Roštiljiada (the Grill festival), which takes place in this town every September. The best grill chefs from Serbia, Bulgaria, FYR Macedonia come to Leskovac to participate in this manifestation. The people from Leskovac have protected their basic recipe for their hamburger preparation by the patent. Another famous specialty dish is Leskovac train, made of various kinds of grilled meat, which, in small portions, accompanied by diverse salads, come to table one after another. Another famous manifestation in this town is Leskovac summer, during which diverse manifestations for audiences of all ages are organised every day till the end of July. People from Leskovac have their Carnival, where traditional folk forms of entertainment are cherished – dodole, koledare, folk dances and other.
Audio record: