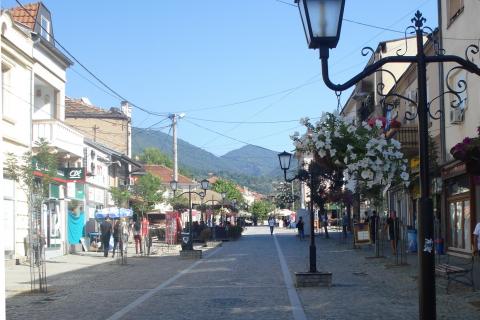 www.tovranje.org
Description:
The most southern town in Serbia, Vranje, lies at 35th kilometre form Macedonian border and 345 kilometres from Belgrade down the E-75 highway. Shielded from winds by the surrounding mountains, Vranje is nested on the banks of the Vranska River. Its common traits with the South and Orient have been reflected in the architecture encountered in this town. The first mention of the town was recorded in 1093 in the famous Alexiad by Anna Komnene. It was annexed to the Serbian Medieval state by King Milutin in 1282, the year of his taking the throne and Vranje becoming the centre of the parish. Today, Vranje is a significant centre of southern Serbia. In the centre of the town, at the main square, there is an Orthodox Cathedral dedicated to the Holy Trinity. It’s construction was completed in 1841, but not before long, its size arose turmoil among the Turks who burnt it. Later, a church was built on the same location, having the characteristics typical of the temples that used to be built under Turkish rule. It was partly dug into the ground in order to be lower, it has no bell-tower and its domes are low and without any openings. It is surrounded by arcades from three sides. Its Iconostasis was carved by local craftsmen who incorporated ornaments depicting plants and animals. Nevertheless, the real pearl of this church are the icons from the Iconostasis made by Dimitar Zograf, the most talented iconographer of the Vardar region of Macedonia, in 1859. A moderate obelisk from 1922 stands in front of the churchyard at the square, in memory of the victims of Bulgarian occupation in the First World War. The street named after King Stefan, Kralja Stefana Prvovenčanog leads to Baba Zlatina Street, an old residential street of the Christian part of the town enclosed by tall walls from both sides, according to Turkish tradition, that got its name after the grandmother of the distinguished writer, Bora Stanković. The house that belonged to Zlata and Bora is number 7, and it has been converted into the Museum of Bora Stanković. The house in which Bora was born in 1875 is placed amidst the agreeable flower garden, being a recognizable trait of all Turkish towns. It was built twenty years before, in a South Morava style with an open porch and characteristics of the typical mid-class family. Bora Stanković celebrated Vranje in his novels and the characters such as Koštana from the novel “Impure Blood”. The centre of town lies to the North of the Orthodox Cathedral. The busy pedestrian zone leads to Pašini konaci in Pionirska Street. The complex consists of two stylish buildings constructed around 1765 by Raif-bey Džinić to serve as his residence. The daughter of the last Pasha of Vranje sold them to the native Metropolitan by whose testament it was turned into an educational institution with the first Secondary school of Vranje established there in 1881. The front lodging (Selamluk), overlooking the street, was used by Pasha and his mail entourage, while the secluded, rear room (Haremluk) was reserved for women. Today, this building houses the National Museum that nowadays exhibits Roman excavations, medieval coins, folk costumes and crafts. The pedestrian zone ends with the Trg Republike (the Republic Square), where there is a monument to the liberators of Vranje from 1878, made by the sculptor Simeon Roksandić. This monument shared the fate of the town and was destroyed twice. Thus, the Serbian soldier being the part of this sculpture misses an arm and some other elements, but the citizens of Vranje love it just the way it is. It even got a nickname, Uncle Mita (čika Mita). There is a magnificent building of old Municipality Seat behind the monument. It is considered the best work of the architect Petar Popović. There is also an Old Hamam immediately across the river, built in the 17th century. Heading four kilometers to the north from Vranje, one may discover the remains of the Markovo Kale fortress. Many believe that the fortress is linked to Marko Kraljević, the greatest hero of Serbian epic poetry. A part of the wall and two towers are all that remained from this fortress. Kale offers a beautiful view of Vranje. Dani Vranja (the Days of Vranje) is the town’s most festive celebration organized each September. Around 32 km from Vranje, near the Macedonian border lies the Prohor Pčinjski Monastery The monastery was dedicated to Saint Prohor, the saint of South Slavs, who lived his ascetic life in this region. Today, the old church where the relics of Saint Prohor of Pčinja are kept is located on the northwest area of the new one. The main building of the monastery dormatory is considered to be one of the best examples of folk architecture from 18th century. In 1944, Macedonian communists met here to pronounce Macedonia the Republic of a new Democratic Federal Yugoslavia. Vranjska Banja spa is located ten kilometers from Vranje. Its hot, healing mineral waters are practically boiling in the stony bed of the Banjštica River, with the deciduous forest along its banks that protects the valley from the harsh mountain winds, being constantly in the misty vapors. This is no wonder, knowing that the temperature of the thermal water reach between 96 and 100°C, making it one of the hottest springs in Europe. The water in the spa is cooled down to the bearable 42°C. Archeological research near the thermal baths has revealed that the waters of Vranjska Banja have been in use for centuries.
Audio record: