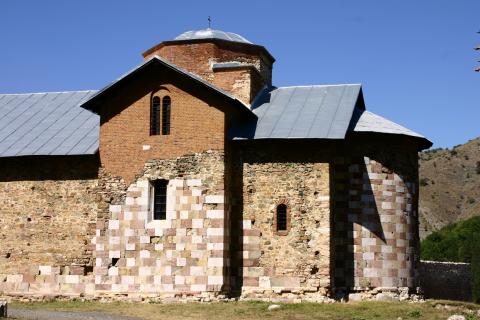 Description:
The Monastery of Banjska, with the Church dedicated to St. Stefan, is located in the place of the same name, 15 km northwestwards from the town of Kosovska Mitrovica. It was erected between 1312 and 1316 by King Milutin, as his own legacy and mausoleum. During the rule of the Turks, a fort was built on the ruins of the Banjska Monastery, whereas the church itself was transformed into a mosque, and remained so transformed until 1914. Apart from the church, the monastery compound also included the defensive towers, a refectory and a number of constructions that were subject to reworking several times during the centuries. According to the ktetor’s wish, the church was constructed on the model of the Studenica Monastery’s Church of the Mother of God. It is a single-nave construction with the dome above the naos, the three-part sanctuary space, the chorists’ spaces which directly continue into the lateral chapels, the narthex and the two high-rising towers – belfries. All the external walls of the church are decorated with massive and nicely shaped cut stones of white and red marble and gray serpentine. The monasteries of Banjska and Studenica are also related to each other through the closeness of their respective sculptural ornaments that achieve a synthesis of the Byzantine and the Romanesque concepts. Banjska had the gorgeous western portal, decorated by plastic presentations in marble. This ornament was dominated by the sculpture of the Mother of God with The Christ, which is preserved in the church in the nearby village of Sokolice today. The frescoes that exuded beauty and for whose painting gold was used, were almost completely destroyed, except for the fragment in the medallions on the arch under the dome, which includes the busts of the saints. The Monastery is situated in the territory of the Autonomous Province of Kosovo and Metohija, which is currently under the administration of UNMIK. It can only be visited under KFOR military escort.