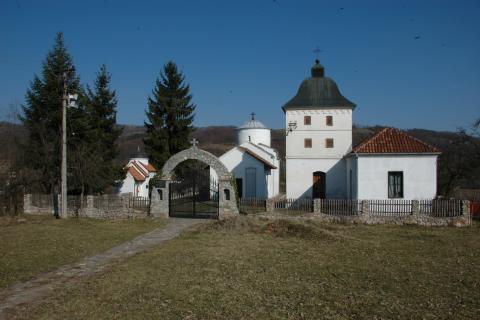 Description:
The White Church of Karan, dedicated to the Annunciation, was erected and fresco-painted by abbot Petar Brajan, who was helped by with his wife Struja, their son and their three daughters, between 1340 and 1342. Their portraits were painted on the northern side of the western part of the naos, whereas opposite them, there are the presentations of the holy members of the Nemanjić Dynasty: Simeon Nemanja, Sava, King Milutin and the then ruler, King Dušan with his son Uroš and his wife Jelena. In the church of Karan, the offertory givers deserving for the erection of the temple were also painted. The church is a single-nave construction with three bays (travées) and the semi-circular apse. It is arched by the semi-round vault, with the dome of the circular tambour above it. The original fresco-painted bricked iconostasis is preserved here. The two masters are likely to have been making their best efforts to paint the walls. In the sanctuary, there are the presentations of the Mother of God with the Angels and the Adoration of the Prelates, whereas in the naos, there are the paintings of the Great Holidays, the scenes from the Life of the Mother of God, the Old Testament compositions, the presentations of individual saints and the gallery of the historical portraits. On the western side of the temple, the simply structured narthex was added in the 19th century. During the archaeological research of 1975, the ktetors’ tombs were discovered, which is indicative of the intention on the founders’ part to make the Church of the Annunciation be their mausoleum as well. The long history of this cult place, dating back to centuries ago, is also demonstrated by numerous sepulchral monuments with reliefs and inscriptions that can be found in the vicinity of the church.