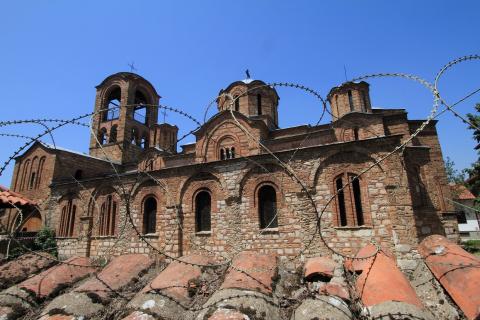 Description:
Certainly the most remarkable mediaeval construction in the town of Prizren is the former Cathedral Church of the Mother of God of Ljeviš, which was renewed on the remains of the church of the 13th century in 1306-07 by King Milutin. The three-nave church was transformed into the five-nave church, with five domes, the narthex and the exonarthex above which the bell tower with two chapels was built. Actually, the protomaster of the Church, Nikola, created an original solution by merging the three-nave basilica in its basis with the concept of the temple of an inscribed cross in the upper construction. During the rule of the Turks, the church was turned into a mosque and the frescoes were stripped off and paint was applied over them. The two layers of the frescoes reflect the essential feature of the artistic legacy of this church. The first layer dates back in the early 13th century and consists of three frescoes (The Wedding Ceremony in Cana, the Healing of the Blind and the Mother of God with the Christ); the second layer of the frescoes was created between 1307 and 1313, and the authors are a group of talented painters led by Astrap. The portraits of the ktetors and the procession consisted of the members of the Nemanjić Dynasty, King Milutin’s predecessors, who are presented bigger than life-size. The basic novelty in the painting reflects in the penetration of new themes from the cycles of the Passion and the Miracle, an increasing number of the figures presented in the scenes and the development of a symbolical language, allegorical, metaphorical and personified meanings, which indicates the adoption of a new Byzantine artistic style, the renaissance of Palaiologos. The monasteries of the Patriarchate of Peć and Granačanica and the Church of the Mother of God of Ljeviš in Prizren, together with the previously already inscribed Monastery of Dečani, have been inscribed in the UNESCO World Cultural Heritage List since July 2006, under the common name “Mediaeval Monuments in Kosovo (SERBIA)”. Since 2006, it has also been inscribed in the UNESCO List of the Threatened World Heritage Sites due to the currently instable situation in the AP Kosovo and Metohija, which is now under the administration of UNMIK. It is only possible to visit the monastery under KFOR military escort.