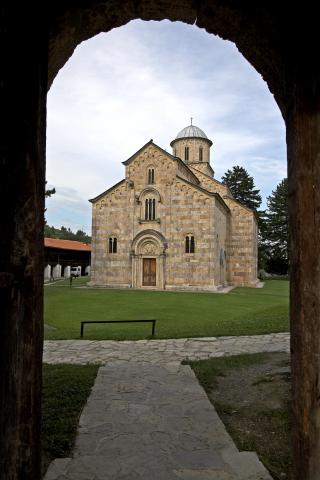 Description:
Dečani Monastery is located 17 km to the south of the city of Peć, on the slopes of the Prokletije Mountains. The monastery was erected by King Stefan Uroš III of Dečani, as his own legacy and mausoleum, between 1327 and 1335. After his death, the works were continued by his son Dušan. Dečani Monastery represents the biggest-size ecclesiastic construction in mediaeval Serbia. It is also known as Visoki Dečani (High Dečani). The Monastery was constructed on the example of the Studenica Monastery’s Church of the Mother of God, with diverse and rich plastic decoration on the portals, windows and consoles. The basis of the Church of The Christ Pantocrator consists of three holes, the three-part sanctuary space, the five-nave naos and the three-nave narthex. Above the central nave, there is a dome, externally eight-sided and internally circular. The dome is 28 m high. The constructor of the temple, Father Vita of Kotor, clothed the structure of the Orthodox temple by shaping in the Romanesque style the façades, performed in the horizontal layers of light-yellow and violet-red marble. The wall painting of Dečani is almost completely preserved and counts over 1000 individual figures and scenes from the history of Christianity, categorized into more than 20 cycles. A series of the portraits of the members of the Nemanjić Dynasty are particularly interesting. The painting originates from the period between 1335 and 1350, and is the work done by a larger number of painters from different parts of Dušan’s Empire, amongst whom artists from coastal regions, who painted frescoes to decorate both Orthodox and Catholic temples, were the dominant ones. Dečani is one of the rare Serbian mediaeval churches in which the original stone iconostasis and a larger number of icons dating back in the 14th century have completely been preserved. The sacristy of the Monastery of Dečani, together with that of Hilandar, is the riches monastery sacristy of the Serbian nation as a whole. In it, about 60 icons dating back in the period from the 14th to the 17th century, old manuscripts, a large number of books and church objects of priceless artistic and cultural-historical value, presented in the building of the monastery refectory and representing the greatest attraction of this monumental compound, have been preserved. The Monastery of Dečani has been inscribed in the UNESCO World Cultural Heritage List since 2004. Since 2006, it has also been inscribed in the UNESCO List of the Threatened World Heritage Sites due to the currently instable situation in the AP Kosovo and Metohija, which is now under the administration of UNMIK. It is only possible to visit the monastery under KFOR military escort.
Audio record: