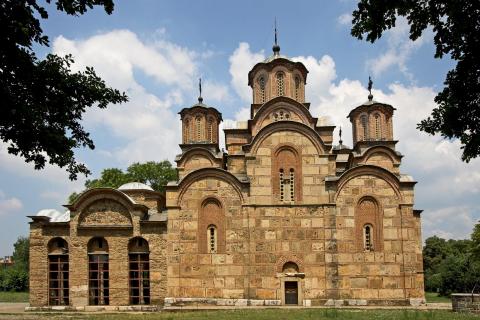 Description:
The Monastery of Gračanica is one of the most beautiful monuments of Serbian mediaeval art. It is located in the village of the same name, 9 km to the southeast of the city of Priština. Only the Church dedicated to the Annunciation has been preserved of all mediaeval monastery compound. It was erected in 1321, as King Milutin’s legacy; it is a five-dome construction with the basis in the shape of an inscribed cross and the façades of alternating layers of bricks and stones. The central dome leans against the four pillars, rising higher than the main space, which on the eastern side continues into the sanctuary space, on the western side into the internal narthex and on the northern and the southern sides into the lateral naves, which end on the two separate chapels. With its three apses, spacious in the outside, the eastern part of the temple creates integrality with the construction as a whole. Gračanica Monastery was fresco-painted by the Greek masters of Thessaloniki, the famous Mihailo and Evtihie, who ended their work of painting in 1321. They are perfectly preserved and belong to the narrative painting, characteristic of the Serbian and the Byzantine arts of the first half of the 14th century. In comparison with the frescoes of the previous century, the compositions are smaller in size, and the motives are more diverse, inclusive of the scenes from the lives of saints and the church calendar. It is in Gračanica Monastery that, for the first time in old Serbian art of painting, the genealogical lineage of the Nemanjić Dynasty, inclusive of the 16 portraits, was painted, and at the entrance to the church, there are the portraits of the ktetor King Milutin and his wife Simonida. Her eyes, damaged in the painting, inspired the poet Milan Rakić to write one of the most beautiful poems in more recent Serbian literature. In the monastery, there is a significant collection of icons, among which the oldest is that of The Christ the Merciful, dating back in the 14th century, which is unique for its large dimensions (269 x 139 cm). The monasteries of the Patriarchate of Peć and Granačanica and the Church of the Mother of God of Ljeviš in Prizren, together with the previously already inscribed Monastery of Dečani, have been inscribed in the UNESCO World Cultural Heritage List since July 2006, under the common name “Mediaeval Monuments in Kosovo (SERBIA)”. Since 2006, it has also been inscribed in the UNESCO List of the Threatened World Heritage Sites due to the currently instable situation in the AP Kosovo and Metohija, which is now under the administration of UNMIK. It is only possible to visit the monastery under KFOR military escort.
Audio record: