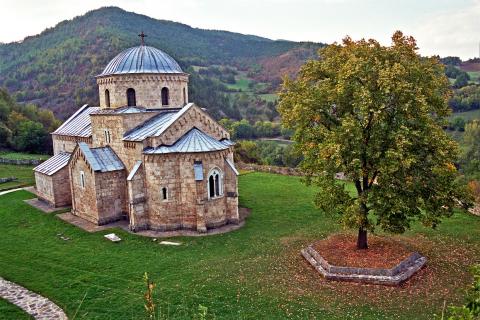 Description:
The Monastery of Gradac is situated on the slopes of Golija mountain covered with forests, about ten kilometers westwards from the ruins of the old Brvenik Fortress. It was erected in the second half of the 13th century as the legacy of Queen Helen of Anjou, King Uroš the First’s wife, who was buried here in 1314. The Monastery was protected by a massive thick wall, and there were two entrances to the monastery. The church was constructed in the style of the School of Ras and includes certain Gothic elements. The construction exudes a significant influence of the Studenica Monastery Church of the Mother of God. The Monastery of Gradac flourished the most in the late 13th and in the early 14th centuries, only to be destroyed by the Turks when Serbia lost its autonomy in 1459. Around 1275, the church was fresco-painted, of which the frescoes have only partly been preserved, and according to the style, they are related to the painting of Sopoćani Monastery. The small Temple of St. Nicholas, erected in the southeastern peripheral zone of the monastery churchyard, was built by applying simple architecture, with the rectangular basis, with no dome and with the rectangular sanctuary apse, and belongs to the Catholic sermonizing church type. The church is assumed to have been constructed prior to the building of the main monastery church in order to perform service there for the workers of the Catholic creed who were performing works on the constructing of the Church of the Mother of God. The main Church of the Mother of God was reconstructed, and the paintings were subject to conservation between the years 1962 and 1973. After the new residence had been built in 1990, the spiritual life of the monastery was revived. The Monastery of Gradac is marked on the map of the Transromanika Cultural Route.