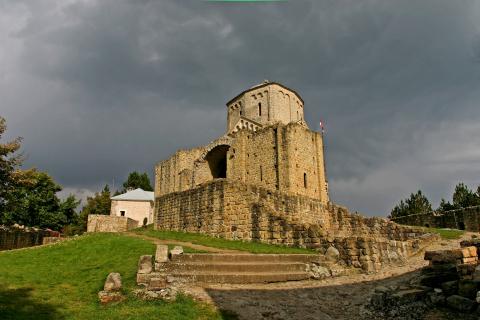 Description:
The Monastery of Đurđevi stupovi is located on the top of the elevation covered with forests, which dominates the panorama of the town of Novi Pazar. The Đurđevi stupovi was erected around 1170, as the legacy of the great district prefect Stefan Nemanja, immediately after the decisive battle of Pantina, in which he had won the Byzantines and his brothers. The monastery compound used to consist of the Church of St. George, a refectory, the residences, the cisterns and the ramparts with the entrance tower. The church was named after St. George, who it is dedicated to, and after the two belfries that had existed there (in the old Slavic language – pillars). Namely, according to Stefan the First-Crowned, Nemanja had erected this church in token of gratitude to St. George, who had liberated him from the dungeon, where his brothers had imprisoned him. The external appearance of this single-nave temple with the three-part sanctuary space, the naos and the narthex exudes the spirit of Romanesque architecture. The blend of the Byzantine spatial solution and Romanesque architecture would grow into an original symbiosis, on the basis of which the style of the School of Architecture of Ras built itself. The frescoes, for the most part damaged and partly relocated to the Belgrade National Museum today, were painted by applying the best traditions of the Komnenian style and were skillfully adapted to the architecture of the temple, which is particularly pronounced in the dome. The painting of St. George on a horse, which is placed above the main entrance to the church, is very impressive. By the addition of the apse on the eastern side in 1282-1283, the entrance tower was turned into a chapel, which King Dragutin intended to be his own tomb. The interiority of the chapel is fresco-painted, presenting the historical events and the portraits of the first members of the Nemanjić Dynasty. The presentations of the four Serbian state assemblies (Sabor), in which historically significant decisions were made, are also impressive. As a part of the Old Ras with Sopoćani whole, the Monastery of Đurđevi stupovi has been inscribed in the UNESCO World Cultural Heritage List since 1979. The Monastery is also marked on the map of the Transromanika Cultural Route.
Audio record: