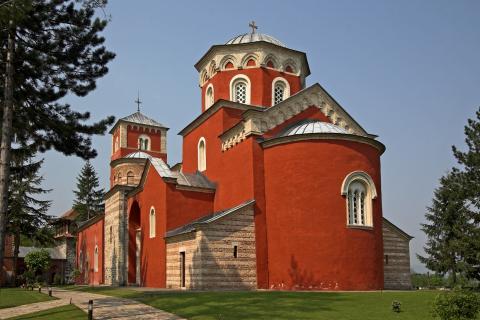 Description:
Žiča Monastery is located in the village of Kruševica, on the road from Kraljevo to Mataruška Banja Spa. It is the legacy of King Stefan the First-Crowned. The construction of the main monastery church dedicated to the Ascension of Our Lord Jesus Christ began around 1206 and ended prior to 1217, when the ktetor received his royal crown from Rome. Žiča is quite a significant monastery for the history of the Serbian nation and the Serbian Church. It is here that St. Sava, as the first Archbishop of the Autocephalous Serbian Church that acquired its autocephality in the year 1219, established the seat of the Serbian Church, crowned his brother as King and consecrated the bishops of the newly-established bishoprics. In Žiča, Stefan’s heirs – the sons Radoslav and Vladislav – were crowned, too; the Archbishop Arsenije, St. Sava’s first successor at the head of the Serbian Church, was ordained. When in the mid-13th century the Archiepiscopal Throne was relocated from Žiča to the Patriarchate of Peć, Žiča did not lose its reputation, but on the contrary, it only became greater, particularly in the time prior to the loss of Serbian autonomy, when the prelates of the Serbian Church were staying there. In the late 13th century, the monastery was destroyed only to be renewed by King Milutin at the beginning of the next century. In the time of the Turkish rule, Žiča was devastated and renewed several times; the appearance it has today is the result of the major restorative works performed between 1925 and 1935, and in the late 1980s. The architecture of Žiča Monastery classifies it into the School of Ras, and its façades are painted in red on the model of the architecture of the Holy Mountain. The original church was a single-nave construction with the broad semi-circular sanctuary apse on the eastern side, the narthex on the western and the rectangular chorists’ spaces on the southern and the northern sides. The original appearance of the monastery was changed because of the deacon-icons and Proscomedia, the removed wall between the naos and the narthex and the added lateral chapel next to the old narthex, as an independent construction with the domes and the semi-circular sanctuary apses. Thanks to the fact that it was the seat of the Archiepiscopate, Žiča had a significant influence on the later monuments of the School of Ras, opening the way for the influences of the Holy Mountain. In its quite damaged wall painting, it is possible to perceive three chronological-stylistic wholes. The first consists of the frescoes painted after the acquisition of the ecclesiastical autocephality, and their authors were the masters from Constantinople. The second comprises the poorly preserved frescoes in the tower chapel painted at the beginning of the fourth decade of the 13th century. The most significant whole consists of the frescoes painted between the years 1309 and 1316, and they are in the main part of the church; they are divided into the following thematic wholes: Grand Holy Days, The Scenes from the Life of The Christ, the Standing Figures of the Saints and the Saints’ Busts. The authors of these frescoes are the masters of the famous painting workshop of King Milutin, whose works and frescoes are in Old Nagoričan, Our Lady of Ljeviš in Prizren and the Royal Church in Studenica. Eastwards from the main monastery temple, there is the Church of St. Theodore Tyron and Theodore Stratilates dating back in the 14th century, the only one preserved construction of the mediaeval monastery compound, architecturally simple and of noble proportions, renewed in the late 18th century. The Monastery of Žiča is marked on the Transromanika Cultural Route.
Audio record: