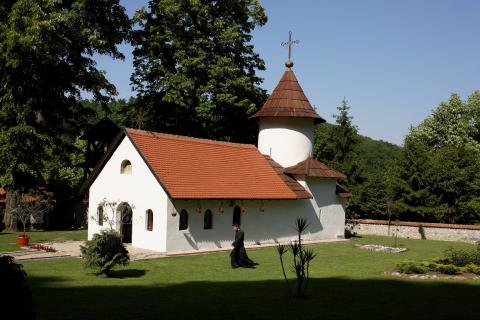 Description:
Jovanja Monastery is located in the village of Zlatarić near Valjevo town (7 km), on the road to Poćuta and Bajina Bašta. It is dedicated to the birth of St. John the Baptist. The Jovanja Monastery’s church is most likely to have been erected in the late 15th or the early 16th century. The oldest part of the church, the church itself, is a single-nave construction with a dome borne by the leaned arches on the northern and the southern side, reclining against the pilasters, and on the eastern and the western sides, by the semi-circular vaults. The apse is semi-circular and vaulted. The two narthexes added later are cambered by means of a barrel-shaped wooden vault. According to the form of the basis, this smallish church belongs to the simplified type of the School of Ras. On the southern side of the churchyard, a memorial fountain was built; the bell tower, decrepit already, was built to the northeast of the church, and on the western side, the parochial home was built. The paintings in the church, belonging to a more remoted past, have been renewed several times. The composition of the Crucifixion of Christ on the northern wall singles out for its monumentality. The presentation of the Annunciation of the Mother of God is on the eastern arch, in the space under the dome, whereas the Baptizing of Christ, which is significantly damaged, is on the southern wall. The monastery was icon-painted by Longin of Dečani, the most popular mediaeval fresco-painter.