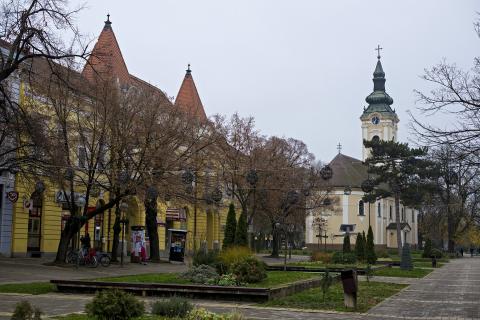 Description:
The Serbian Orthodox Church in the town of Kikinda, dedicated to St. Nicholas, was erected in the second half of the 18th century. The construction reflecting the features of classicist architecture is characterized by the extremely decorative western façade, with the overhand decorated with the tympanum and the pilasters in the Doric style. The painting of the iconostasis was previously attributed to Teodor Ilić Češljar, whereas the analysis of the style of a more recent date have shown that the iconostasis in the town of Kikinda is the work done by young Jakov Orfelin in 1773. The Baroque-Rocaille sanctuary partition of the developed iconographic program is divided into three zones. The Annunciation of the Mother of God in the first are the most quality painting in the Baroque style rich in colors, whereas the majority of the other compositions reflect repainting, damage and retouching. In the other, there are the scenes of the Holiday, of the original compositional solutions and the gossamer-like palette, as well as a series of the monumental figures of apostles in heavy draperies. The third zone, performed in an emphatically Baroque manner, presents the Crucifixion and the figures of the Prophets. The two wall paints in oil, the Last Supper on the northern wall of the naos and the Resurrection of the Christ on the southern, were painted by Teodor Ilić Češljar in 1790, in the manner of the late-Baroque style, Rocaille palette, a solid drawing and composition. In the narthex, there are the wall paintings done by Ljubomir Aleksandrović, dating back in the late 19th century.