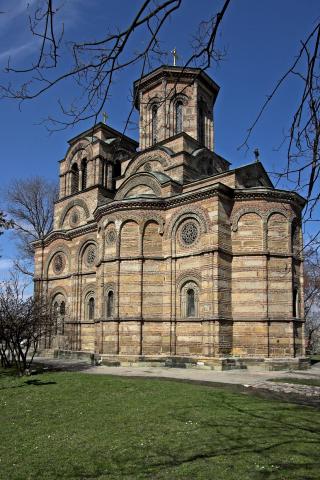 Description:
The Church of St. Stefan is the court’s house of prayer (built for the court’s needs), which was erected by Prince Lazar inside the walls of the newly-built capital city of Kruševac, most likely between 1377/78 and 1380. It served as the architectural example on which many churches built in later times were modelled. The temple belongs to the first phase of the Moravian style, with the trefoil basis of the compact type, with three bays (travées), the dome rising above the central and the narthex that originally had lateral passages. Above the narthex, the tower-belfry with the catechumen and the chapel upstairs rises. The church was built on the example of the Byzantine model of the church by alternating the horizontal layers of cut stone and three layers of the brick. The stone intertwining around the windows and the perforated rosettes represent the most effective decorative elements that, fitted into the well-envisaged and proportioned architectural shapes, create an exceptionally harmonious whole. It seems that originally there were no paintings, and, by all indications, the church was fresco-painted by painter (zographer) Andra Andrejević with his company no sooner than in the period from 1737 to 1740, of which only fragments have been preserved. The iconostasis of 1844 is probably painted by Živko Pavlović. Comprehensive archaeological excavations have been performed around the church lately. The foundations of numerous constructions of the old town have been unearthed, and the remains of a high-rising tower are preserved best.