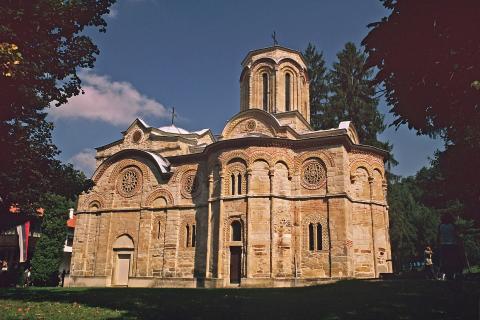 Description:
The Monastery of Ljubostinja, with its Church of the Falling Asleep of the Mother of God, the legacy of Princess Milica, was erected in the late 14th century. It is one of the most significant monuments of the Moravian School. Its architect was Rade Borović, the famous Mason Rade of folk songs, who carved his name on the threshold of the internal portal. During the Turkish occupation, Ljubostinja was one of the centers of Levač region. It was renewed several times: its architecture was renewed in the 17th century, its paintings in the late 18th century, and after 1851, additional changes were made in the original appearance of the edifice. The monastery church is a typical monument of the Moravian School of Architecture. Its basis is in the shape of a developed trikonhos, with the dome leaning against the four independent pillars. It was built from sandstone, with the façades dissected vertically and horizontally. The plastic façade decorations consist of the sculptural ornamentation distributed on the windows, the frames of the portals, the rosettes and other parts. Ljubovija’s plastic decoration makes one with the architecture of the church and has a symbolical meaning that has not been sufficiently explored yet. The original paintings done upon Princess Milica’s order are preserved in the tambour of the dome, and were later additionally painted, most likely around 1415, which can be concluded on the basis of the ktetors’ and rulers’ portraits. They are signed by a painter and hieromonk Makarije. The iconostasis in the monastery church was painted by Nikola Marković in 1822. The older residence, which is on the western side of the monastery, is a monumental edifice constructed in the time of Prince Miloš Obrenović.