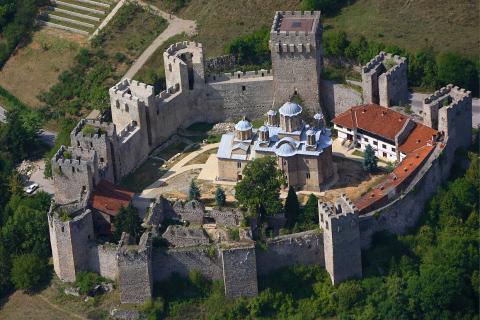 Description:
The Monastery of Manasija is situated by the small river of Resava, not far away from the town of Despotovac, and is one of the last monuments of Serbian mediaeval culture. In the Middle Ages, the monastery bore the name of Resava, and the Manasije name is of a more recent origin. The church was erected by Despot Stefan Lazarević, Prince Lazar Hrebeljanović’s son. The construction of the church, the grandiose fort and the big refectory lasted from 1406 to 1418. The imposing ramparts with 11 towers, belted by a trench, were a modern system for defending the monastery in that time. The most dominant and the biggest-size donjon tower is known as Despot’s Tower. The fortress was entered through the big gate on the western side. The Church of the Holy Trinity, with the basis in the shape of a developed trikonhos, is categorized into the group of the most representative edifices of Moravian architecture. The façade decorations, however, made of cut stone have remained the characteristics of the School of Ras. The mosaic-shaped floor is a special rarity in Serbian mediaeval architecture. The wall paintings that were finished in 1418 are much damaged in the naos, and only in fragments have they been preserved in the narthex. The frescoes of Manasija, together with those in Kalenić, are the most beautiful among the Moravian monuments and are classified into the group of the best in old Serbian painting in general. Apart from the monumental paintings of the warriors in the chorists’ spaces, the Prophets painted inside the dome, as well as the idealized painting of the ktetor, Despot Stefan Lazarević, bringing the model of the church to the Holy Trinity, are of particular beauty. Apart from the monastery church and the fort, the remains of the old refectory and the library are partly preserved in Manasija. In the Library, there was a manuscript workshop, where numerous books for the need of the church were being written. “The Manuscripts of the Resava School” had a great reputation and for long were the example on which later scribes modelled their work.