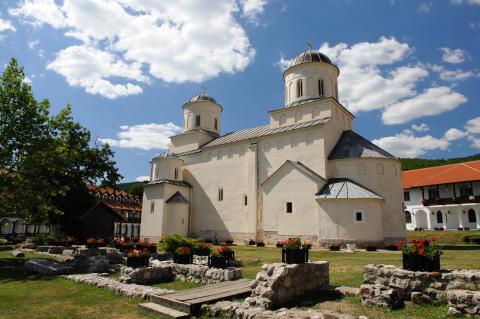 Description:
The Monastery of Mileševa, with the Church of the Ascension of The Christ, is located in the valley of the Mileševa river, 5 km eastwards from the town of Prijepolje. It was erected in the third decade of the 13th century by King Vladislav Nemanjić, Nemanja’s grandson and son of Stefan the First-Crowned. Mileševa is one of the most significant spiritual and artistic centers of the Serbian nation. The monastery became quite popular among people after the relocation of the relics of St. Sava’s from Trnovo in 1236. In 1595, the Turks took the relics to Belgrade and burnt them to ashes in Vračar. In Mileševa in 1377, Tvrtko Kotromanić was crowned King of Bosnia and Serbia, and in 1446, Stefan Vukčić Kosara received the title of Herzog from Saint Sava. The Turks burnt the monastery to ashes several times; in spite of that, however, Mileševa developed its rich cultural activity. In the 16th century, there was a printing-house in the monastery, and liturgical books were printed there. The Church of the Ascension of The Christ is a construction built in the style of the School of Ras, characterized by the single-nave basis, the three-part sanctuary space, the dome built at the intersection of the nave and the chorists’ transept, and the narthex. The outside narthex with the lateral chapels of St. George and St. Demetrius was built around 1236. Before the year 1228, the naos and the narthex had been decorated with the extraordinarily beautiful frescoes. The portraits of King Vladislav, Simeon Nemanja, St. Sava, Stefan the First-Crowned and King Radoslav, as well as the White Angel on The Christ’s Tomb represent the masterpieces of the Serbian and the European art of the 13th century. The portraits of the members of the Nemanjić Dynasty, as the typical composition of the Serbian rulers, were also painted for the first time in Mileševa, only to become inevitable in the painters’ compositions in Serbian churches in the times that were to come. The paintings in the external narthex and the chapels were done around 1236. Having suffered damage in the Turkish ravages, the paintings of Mileševa were restored in the 16th and the 17th centuries. The conservation of the paintings was performed in the 1950s, and the large-scale research studies of, the conservation and presentation of the architecture were brought to an end in 1996.
Audio record: