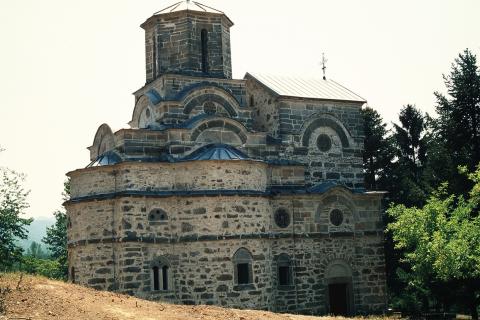 Description:
On the right riverbank of the Rasina, in the village of Naupari near the town of Kruševac, there is a monastery of the same name, and a church dedicated to the Mother of God. The Church was erected in the 1370s. The first data recorded in writing about the Naupara is found in the Charter of Prince Lazar in 1382, by which, among other things, he also gave Drenča Monastery “the Court in Naupara with the Church” as a gift. There are no concrete data about the founder of Naupara; yet, according to a legend, the church was built by Despot Stefan. Architecturally, the church resembles Lazarica, which had been built somewhat earlier, and is a monument of the Moravian School of Architecture. Its shape today is the result of the reconstruction done in 1835, upon Prince Miloš Obrenović’s order. Its basis is in the shape of a compact trikonhos, and above the central space, the dome leaning against the pilasters and the lean-to towers rises, whereas the tower above the narthex has a floor. The Monastery of Naupara is particularly attractive for its stone rosettes above the portal, especially the bigger ne framing the circular relief presentations of the motifs bearing the mediaeval symbolic reference to the twelve months in the year. Today, Naupara is a women’s monastery, in which several nuns who live there cultivate a smaller landed estate.