The Patriarchate of Peć 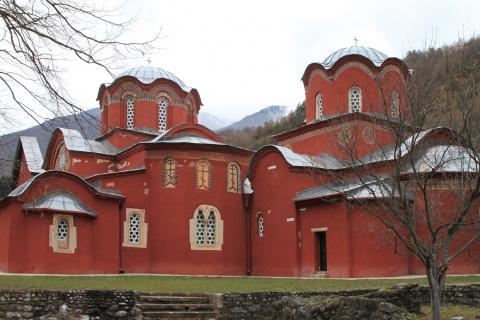 Description:
The Patriarchate of Peć is situated at the very entrance to Rugovska Gorge, not far away from the city of Peć. In the monastery, there are four churches, erected one next to the other, so that they appear as a uniform construction today. The oldest is the Church of St. Apostles, erected in the 1220s, whose ktetor was the second Serbian Archbishop Arsenije the First, who relocated the seat of the Archiepiscopate, which had previously been in Žiča. This single-nave construction with the dome, the spacious sanctuary semi-circular space and the elongated rectangular space reminds of the architectural solution applied to the monastery of Žiča. At the beginning of the 14th century, in the period of ten years or so, new churches were constructed on the both sides of the church, namely the Church of St. Demetrius (on the northern side), and the Church of the Mother of God and a small Church of St. Nicholas next to it (on the southern side). The narthex was built on the western side. The Church of St. Demetrius has the basis of the compact inscribed cross-in-square with the dome leaning against the angular pilasters and the façades breathed life in by alternating the stone and the brick. The Church of the Mother of God is architecturally close to the Church of St. Demetrius, whereas the small Church of St. Nicholas is of simple architecture. The whole history of the styles of mediaeval wall painting art can be perceived on the walls of the churches. The oldest frescoes painted are those in the Church of St. Apostles (13th century), placed inside the space under the dome. The largest number of the frescoes in the Church of St. Demetrius were painted by painter Jovan, who was typically prone to showing details. The girl with a jug in the painting of the Nativity of the Mother of God in the sanctuary is known for its classical beauty and loveliness. The frescoes in the narthex were painted at several intervals from the 14th to the 18th centuries. Immediately next to the entrance, there is the painting of the lineage of the Nemanjić Dynasty. In the Church of St. Demetrius, there is a monastery sacristy, consisting of a large number of icons, manuscript books and coppersmith’s objects. The icons originate from the Icon-painting Workshop of Peć, which was particularly active in the second half of the 16th century. The interiorities of the churches preserve the marble sarcophaguses with the relics of the Archbishops and Patriarchs of Peć and for their sculptural decorations, they are considered as precious and valuable works of art. The monasteries of the Patriarchate of Peć and Granačanica and the Church of the Mother of God of Ljeviš in Prizren, together with the previously already inscribed Monastery of Dečani, have been inscribed in the UNESCO World Cultural Heritage List since July 2006, under the common name “Mediaeval Monuments in Kosovo (SERBIA)”. Since 2006, it has also been inscribed in the UNESCO List of the Threatened World Heritage Sites due to the currently instable situation in the AP Kosovo and Metohija, which is now under the administration of UNMIK. It is only possible to visit the monastery under KFOR military escort.
Audio record: