Church of the Holy Apostles Peter and Paul 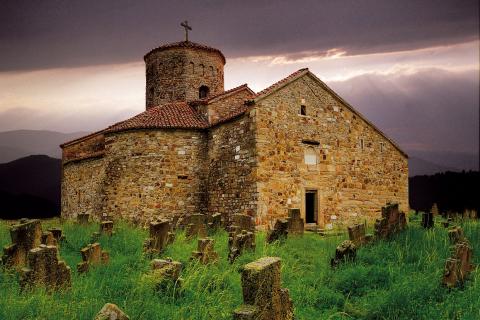 Description:
The Church of St. Apostles Peter and Paul, also known as Peter’s Church, belongs to the oldest mediaeval sacral monuments in the Serbian territory. The historical sources do not provide us with data about the time when the church was constructed, but it is mentioned in those sources as the seat of the Episcopate as early as in the 10th century. In its place, there had been an early-Christian building, erected in the 6th century. It is located in the vicinity of the town of Novi Pazar. This temple is especially significant for the Serbian history because it is related to the key events in the life of Stefan Nemanja: his baptism, the assembly against the Bogomils and the handing over of his powers to the hands of his son Stefan. That Peter’s Church was existent continuously as a Christian house of prayer for over ten centuries is proved by the numerous interventions performed on both its architecture and its fresco-painted decoration. The basic concept of this construction rests on the circular basis with the dome and as such has survived as dominant to date; however, new elements (the gallery, the ring-shaped nave, which was later broken by the annex of an irregular quadrilateral shape) were added to it in the reworking performed in an unknown time. According to their stylistic characteristics, the three layers of the fragmentarily preserved painting are dated back in the period between the 9th and the 10th centuries, the end of the 12th century and the ultimate decades of the 13th century. Perseverance in showing respect for this ancient cult place in the previous two centuries is reflected in the necropolis with a large number of monumental sepulchral monuments. In 1979, the Church was inscribed in the UNESCO World Cultural Heritage List as part of the whole of Old Ras with Sopoćani.