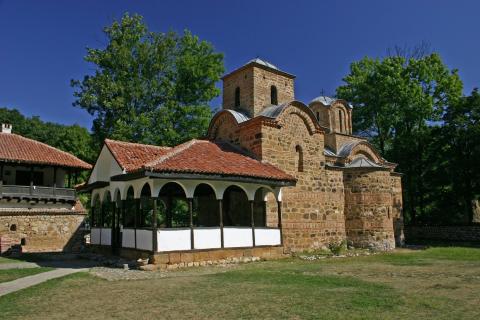 Description:
The Monastery of Poganovo is located nearby the village of the same name, 25 km to the south of the town of Pirot. It was constructed in the ancient cult place, separated by the gorge of the river Jerma from the roads and the river valleys, which posed a threat from potential enemy invasions. The monastery compound with the Church devoted to St. John the Theologian is only a part of the former monastery whole of those times, which was belted by the ramparts. Konstantin Dragaš, one of the last Serbian squires from the time after the decline of the Serbian state, is the ktetor of the monastery. The construction of the church was brought to an end in 1395, before Konstantin was killed in the battle of Rovine, and the construction of the church was supervised by his sister Jelena, who was the wife of the Byzantine Emperor Manuel II Palaiologos. Her name, together with the names of Konstantin and John the Theologian, is carved on the three circular plates incorporated in the western façade of the church. The temple was built as the trikonhos of a compact basis, with the seven-sided tambour of the dome. Above the narthex, there is a floor unit, above which the tower-belfry of a square basis rises. According to its spatial structure, the Church has a great deal in common with the monuments of the Moravian School of Architecture, but, on the other hand, the façades are more modestly treated. It was built from broken stone and bricks. The way how its square basis transforms itself into the ring of the dome shows the specific constructive solutions applied to this church. The church was painted in 1499, whereas the narthex was left without any painted ornament. The frescoes that have been preserved quite well testify to the high painting qualities of the workshop in Kostur, which, in the 1480s, developed its activity in the territory of Thessaly and northern Greece, via Macedonia to Serbia and western Bulgaria. Apart from the usual scenes and figures, the rich compositions of the wall decorations also contain rare thematic wholes, such as: the sources of the wisdom of God, the allegoric presentations of the doctrines of St. John the Golden Mouth and St. John the Theologian and so forth. The exceptional two-sided icon of the late 14th century and the Iconostasis of 1622 are kept preserved in Sofia. In later times, a group of churches built on the model of Poganovo gathered together in this field. The porch in front of the church and the edifices in the churchyard owe their appearance today to the renewal in 1876.