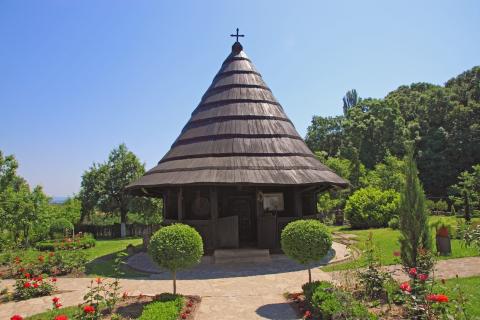 Description:
The Monastery of Pokajnica (Repentance) is located in the district of the Old Village (Staro Selo), 3 km away from the town of Velika Plana. The Log Church was erected by Prince Vujica Vuličević of Smederevo Nahiya, in the place where he had participated in killing his godfather Karadjordje. The building of the church was interpreted as an act of repentance, after which the church was named in the first place. It is a church of a single-nave circular basis, with the five-sided apse and the seven-sided porch, added to it in 1880, when the church was reroofed with shides. Its foundation is made from broken stone and the walls with the windows are made of trimmed oak beams. The interiority of the church is divided into the narthex, above which there is a gallery, the naos – cambered with planks cleft in slices and the sanctuary part of the church. The original iconostasis is the work of painter (zographer) Konstantin originating from 1818. In the churchyard, there is a wooden bell tower and the residence, probably dating back in the time when the church was built, with wooden bars on the windows. It had been a secular Repentance Church until 1954, when it was transformed into a monastery.