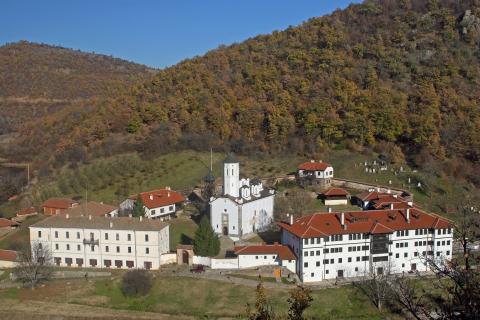 Description:
The monastery is situated on the wooded slopes of the mountain of Kozjak on the left bank of the river Pčinje, close to the river of Klenike, 30 km south of Vranje. According to tradition it was built in the 11th century by the Byzantine emperor Romanos IV Diogenes as a mark of gratitude to Saint Prohor who had prophesied that he would become emperor. The original church, raised above the grave of this renowned saint and missionary, has been restored a number of times. One of the most far-reaching restorations was carried out by King Milutin who in 1316 or 1317 employed the Thessalonian artists Mihail and Eutychus to paint the new church. After the Battle of Kosovo, the monastery was demolished by the Turks and restored in 1489 by one Marin of Kratovo. The frescoes painted at this time are considered some of the most important artistic creations of their time. There was a painters’ studio in the monastery in the 16th century, and the artists resident there created frescoes of great value in the chapel on the south side of the church. The imposing multi-domed church now standing here was built in 1898 and incorporated the older structures. The apse houses the grave of St Prohor Pčinjski and the monastery charnel-house. Two residential buildings (konak) dominate the imposing monastery complex, of which the so-called Vranjanski Konak, massive in size, is one of the most beautiful buildings of this type in Serbia. It was built between 1854 and 1862, a donation by Hadži-Mihailo Pogačarević, a merchant from Vranje.