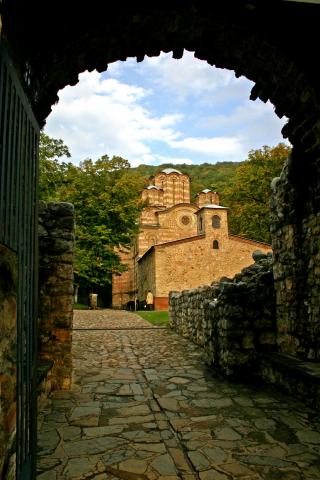 Description:
Ravanica monastery, together with the Church of the Holy Ascension, and its buildings surrounded by strong defensive walls with seven towers, lies at the foot of the Kučaj mountains, in the village of Senje near Ćuprija. It was the endowment of Prince Lazar. It was built during the period between 1375 and 1377, and its frescoes were painted in the years preceding the Battle of Kosovo. The benefactor’s composition was added to after Lazar’s death in the battle. Due to its architectural and artistic features, the Ravanica church can be called the birthplace of the new artistic movement called the Morava school. The church is original in its architectural style, which is a blend of the Mount Athos tradition of the trefoil base and the cross-in-square five-domed model which became standard in the time of King Milutin. Its trefoil floor plan inspired the future development of church layout. The church was built from alternating rows of stone and brick and was decorated with ceramic ornamental elements and rich sculpture. In its frescoes, which have remained preserved in the apse and main interior portion of the church, certain innovations can be observed relating to patterns in the selection of themes and cycles (Major Festivals, the Passion of Christ, Miracles and Parables) which were to become standard in the painting of later Moravian Serbian churches.
Audio record: