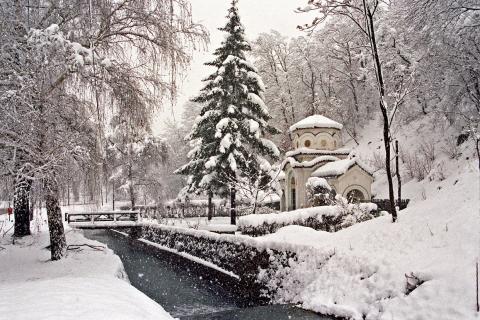 Description:
The Monastery of Rakovica, with the Church of St. Archangel, was erected in the vicinity of Belgrade, in the valley of the Rakovička river, in the 16th century, in the place where an older cult construction had previously existed. The monastery was destroyed and renewed several times, and its appearance today is to the largest extent owing to the Obrenović family, especially Prince Miloš and Tomanija, the wife of his brother Jevrem, who provided the funds and supervised the reconstruction performed between 1861 and 1865. The monastery church’s basis is trikonhos, with the two eight-sided domes without the pedestal above the naos and the narthex. The iconostasis was replaced with the new one in the early 20th century and it is the work of the painter Rafail Momčilović. In the narthex, there is Jeverm Obrenović’s family tomb and General Milivoje Blaznavac’s tomb. Vasa Čarapići, a duke in the First Serbian Insurrection, whose sepulchral monument was designed by Architect Kosta J. Jovanović upon King Peter the First’s order, was buried next to the northern outside wall of the narthex. In the monastery churchyard, there are the graves of the significant historical figures, which testifies to the great reputation the monastery enjoyed as well as to its significant role in the history of renewed Serbia. In front of the churchyard, a fountain was built according to the design of architect Jovan Ilkić. Serbian Patriarch Pavle was buried in the monastery churchyard in 2009.