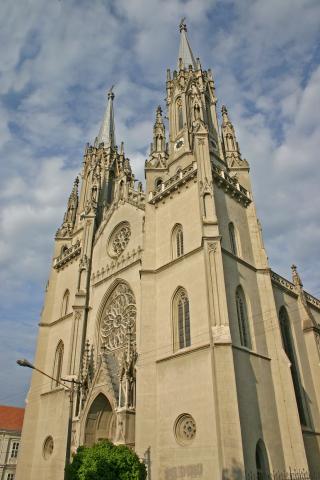 Description:
The tallest and most striking building in Vršac is without doubt its Cathedral, the two steeples of which can be seen from afar. This imposing Neogothic structure dedicated to Saint Gerard was built in the period 1860-63 and stands on the site of an earlier church also dedicated to this saint. It was built to the plans of architect Franz Brandeiss, whose design relied heavily on mediaeval Gothic culture. Rich sculpture is mostly found in the upper areas of the steeples, as well as around the portals and windows. Inside, the three naves end in three altars, the middle one of which was painted in 1863 by Karl Geiger, professor of the Vienna Academy of Fine Arts. It is one of the most beautiful and largest churches in the country..