The Cathedral Church of the Holy Archangel Michael 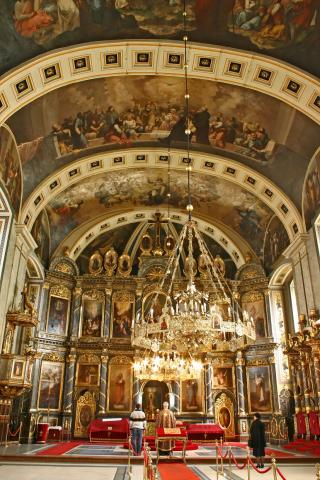 Description:
The Cathedral Church of the Holy Archangel Michael (Saborna Crkva) was built between 1837 and 1840 on the site of an older church from 1728 according to the plans of Pančevo architect A.F. Kverfeld. In architectural terms it was built in the Classical style with elements of the Baroque, as a single-nave structure with a tall steeple to the west. Its interior decoration was carried out between 1841 and 1845. The designs for the carving work were made by famous sculptor and plaster medallion artist Dimitrije Petrović, while the painting work was carried out by Dimitrije Avramović, one of the most important Serbian painters of the 19th century, whose formative influences were the Vienna Academy of Fine Arts and the Nazarene movement in church painting. The Cathedral in Belgrade is one of the largest church structures raised in the Principality of Serbia. It belongs to a key phase in the development of 19th-century Serbian art which was moving closer to western European styles. It is also important as the city's cathedral church, with which many historical events from Belgrade's and Serbia’s past are connected. In it can be found the relics of Prince Stefana Štiljanović and the tombs of Prince Miloš and Prince Mihailo Obrenović. Dositej Obradović and Vuk Karadžić are buried in the churchyard.