The Church of St. Achillius 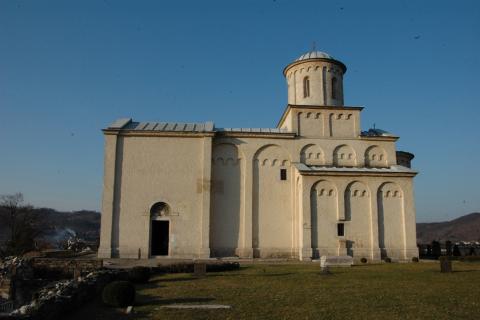 Description:
In the center of Arilje, in the prominent place from which it dominates the surroundings, there is the Church of St. Achillius, the legacy of King Dragutin. It was erected in the late 13th century and was painted with frescoes in 1296, which is testified to by the preserved inscription on the fresco in the ring of the dome. Architecturally, the Church is classified into the group of the monuments of the School of Ras. It is a single-nave construction with the dome, the narthex and the later added external narthex. It has a three-part sanctuary space and rectangular chorists’ spaces. The hexagonal dome rising above the central space of the church and the façades cleft by blind arcades and pilasters give the church the pronounced tone of verticality. The Church distinguishes itself as a gallery of precious frescoes, which touch the flows of the monumental, plastic style of the 13th century. The largest number of the preserved frescoes are found in the narthex, partly in the naos, and less than significantly in the external narthex. In the higher zones of the naos, there are the Great Holidays, the Passion of the Christ and the scenes from the Life of the Mother of God; in the first zone of the naos, there are the standing figures of the saints and the processions of the members of the Nemanjić Family and the Serbian archbishops and bishops. The most interesting part of the fresco-ensemble are the portraits of the kings Dragutin, holding the model of the church in his hands, his brother Milutin, Katelina, Dragutin’s wife and Dragutin’s sons Vladislav and Uroš. It is here that, for the first time in the history of Serbian wall painting, the ktetors and the rulers are presented with a passionate intention to glorify the royal rule. The paintings of Arilje were the herald of a new style, the style by which the painting workshop at King Milutin’s court would mark the Serbian art of painting in the early 14th century.