Monastery of St. Nicholas of Dabar 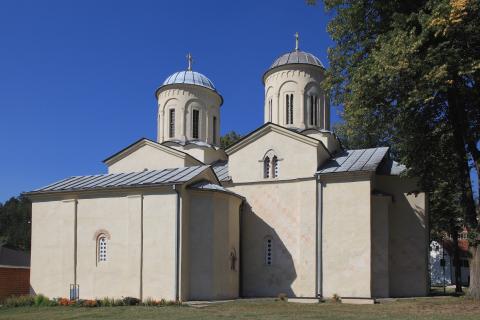 Description:
The monastery in the town of Pribojska Banja Spa is devoted to St. Nicholas of Dabar. It is unknown when the monastery was established; however, it is known to have existed in the Studenica Typicon in the 12th century, when the abbot of the monastery took part in the election of the abbot of Studenica Monastery. Since 1220, it had been the seat of the Episcopate of Dabar, for which reason it was named St. Nicholas of Dabar Episcopate; later, the monastery became the seat of Dabar-Bosnian Episcopate, established by St. Sava. The sepulchers of the most distinguished squire families during the rule of Tzar Dušan and Tzar Uroš testify to the significance the monastery had had until the Serbian state fell; for some time, the church was the mausoleum of the influential Vojinović squire family. Today’s Church of St. Nicholas was erected by King Stefan of Dečani in 1329, and around 1570, the church was significantly renewed after having been destroyed by the Turks. The Monastery compound consists of the Church of St. Nicholas, the smaller-in-size Church of the Falling Asleep of the Mother of God, added along the southern wall of the Church of St. Nicholas and the foundations of the Church of St. Nicholas. The Church of St. Nicholas has the basis in the shape of an inscribed cross with the semi-circular apse and two semi-circular niches on the eastern side, the narthex and the spacious open porch on the western. The constructive structure of the temple comprises two comes above the central space of the naos and the narthex. In the sanctuary and the naos, two layers of frescoes are preserved – the older, dating back in the 14th century, and the more recent, dating back in the 16th century, whereas in the narthex, there is only one layer of paintings dating back in the 16th century. The older paintings represent only the part of the Serbian art of painting created by abandoning the Classicism of the Renaissance of Palaiologos. The more recent frescoes are the work done by the unknown painters of the Painting Workshop of Peć and, if their style and iconography are taken into consideration, they repeat the older paintings.