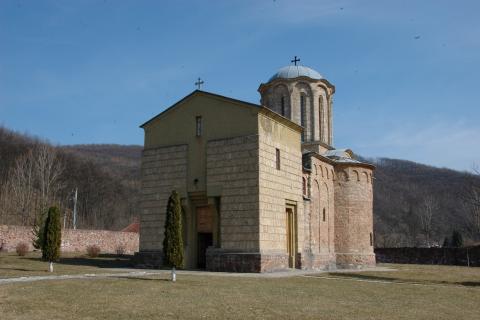 Description:
The Monastery of Sisojevac, with the Church of the Holy Transfiguration, is located by the river of Crnica, in the village of Sisevac, 12 km to the southeast of Ravanica. It was named after its ktetor, Monk Sisoje. The monastery is assumed to have been erected in the 1370s, and its ktetor is mentioned for the first time in the Charter of Princess Milica of 1398, by which Milica gave Monk Sisoje a land estate in the vicinity of Parakin’s Boat as a gift. Monk Sisoje was buried in the church and the image of his has poorly been preserved on the fresco in which he is holding the model of the church in his hands. According to its shape, the church belongs to the monasteries of the Moravian School, but only differs in that it has no Moravian ornaments on its façades. Its foundations are in the shape of the compact triconohos, with the externally seven-sided and internally semi-circular apses. Above the central part, there is a dome leaning against the arches and the pilasters. The spacious rectangular narthex was constructed simultaneously with the church. The façades of the church were plastered and the church was decorated with paintings. Fresco-painting in the church is only partly preserved. It originates from the period after 1402, and the scenes and the figures that have been preserved better indicate a similarity to the frescoes of Ravanica.