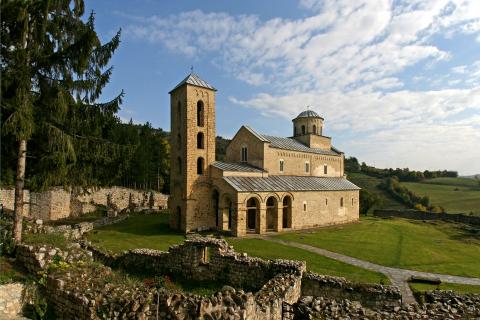 Description:
The Monastery of Sopoćani is situated at the very source of the Raška river, about 15 km away from the town of Novi Pazar. King Uroš I Nemanjić erected the monastery as his own sepulchral church by 1260, and his great-grandson Dušan expanded and renewed it in the mid-14th century. Of the once larger monastery compound, which consisted of several constructions (the refectory, the residences and so forth), the Church of the Holy Trinity is the only one to have been preserved until these days. The monastery was surrounded by a big thick stone wall with the two gates. According to the architectural design, the church belongs to the School of Architecture of Ras. The monastery Church of the Holy Trinity represents the type of the single-nave basilica with the dome and the spacious sanctuary apse, whereas the narthex with the high-rising three-floor bell tower was added to it later. The church was built with hewn dripstone, including the elements indicating the Romanesque style of construction. The paintings in the church are categorized as the most impressive achievements of the Byzantine fresco-painting, which monumentally conjures up the figures and the events of the Christian history. The frescoes of Sopoćani, painted in the second half of the 13th century, represent the peak of a classical style whose fundamental categories were harmony and beauty. The most precious fresco is the composition of the Falling Asleep of the Mother of God on the western wall of the church, which is characterized by a symphony of the different nuances of yellow, blue, green and violet colors. As a part of the Old Ras with Sopoćani whole, the Monastery of Sopoćani has been inscribed in the UNESCO World Cultural Heritage List since 1979. The Monastery is also marked on the map of the Transromanika Cultural Route.
Audio record: