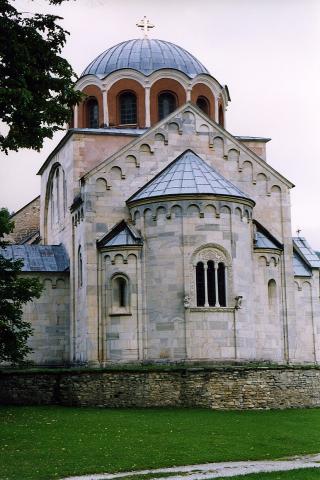 Description:
Not far away from the picturesque gorge of the Ibar river, on the right bank of the Studenica river, belted by a high protective wall, the Monastery of Studenica rises, as the legacy of the great district prefect Stefan Nemanja, the establisher of the autocephalous Serbian state and the founder of the Dynasty that would be ruling over Serbia for two solid centuries. The monastery is the most significant monastery compound of mediaeval Serbia and the major spiritual and artistic center of the Serbian nation. In slightly over than a decade, from 1183 to 1196, the most beautiful construction of the Serbian mediaeval architecture was given its shape and appearance. Since the 12th century, when the monastic community was established, Studenica has never, not for one single moment in its history, had any interruptions in its several centuries long existence. As the legacy and the grave of the founder of the Nemanjić Dynasty, Studenica served as a model to many rulers belonging to this lineage for the erection of mausoleums that would be similar in form to the Church of the Mother of God. The Church of the Mother of God belongs to the most significant monuments of the School of Architecture of Ras. The church is a single-nave construction, with the naos, the three-part sanctuary space and the narthex, separated from the naos by a wall. Above the central part of the church, the dome with the proportionally low tambour rises. Apart from the dome and the external narthex, the white marble-clad outside walls, and the windows and the portals are decorated with stylistically highly-valuable ornaments. The original blend of the Byzantine space and the structure of the temple and the external forms and their shaping in white marble, originating from Romanesque architecture, make Studenica a masterpiece of mediaeval European architecture. The frescoes, the masterpieces of Byzantine painting at the beginning of the 13th century, marked the development of Serbian mediaeval painting. In the sacristy, some of the capital samples of Serbian applied art, such as Stefan Nemanja’s ring, the objects made from metal, the shrouds, the charts and other relics of saints are preserved. The King’s Church, the legacy of King Milutin built in 1314, with its exquisitely sophisticated wall paintings, has a special place within the compound of Studenica Monastery. The church was built in the shape of a compact cross-in-square with the externally eight-sided and internally round dome. It represents the creative ultimate of the court painters Mihailo and Evtihije as well as one of the most beautiful fresco-wholes in Serbian mediaeval art. In 1569, the immaculately composed scenes from the life of the Mother of God were significantly renewed by Longin, the greatest Serbian painer of the 16th century. With its temples, refectories, towers and residences, the Monastery of Studenica has preserved its original purpose and function, and, as a first-rank legally protected monument, it has been inscribed in the UNESCO World Cultural Heritage List since 1986. The Monastery of Studenica is marked on the map of the Transromanika Cultural Route.
Audio record: