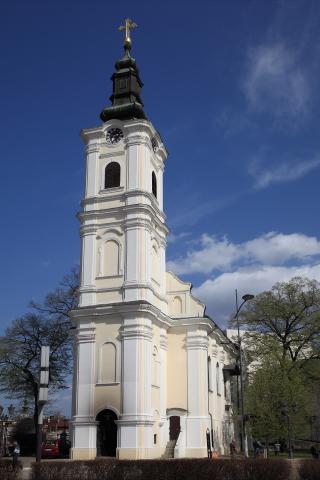 Description:
Almaška Church in the city of Novi Sad belongs to the monumental and representative ecclesiastical edifices that were erected in Vojvodina in the late 18th and the early 19th centuries. Designed in the spirit of Classicism, the church was built following Martin Kovčarski’s design, modified to some extent, in 1797. It is a single-nave construction with the semi-circular sanctuary apse and the high-rising bell tower, dominating the western forepart. The iconostasis partition, for which Arsa Teodorović performed the painted decoration and Aksentije Marković, who most likely decorated the pulpits dedicated to St. John of the Golden Mouth, Saint Basil the Great and Athanasius of Alexandria, performed its rich carvings, has a special value. The miraculous icon of the Mother of God of Almaš on the Throne of the Mother of God was replaced with the composition done by Uroš Predić. The wall paints in oil on the vault of the naos were painted by Arsa Teodorović, whereas Andrija Šaltist was engaged to perform the parts in the sanctuary space dating back in the 18th century. The iconostasis of the Church of Almaš is one of Arsa Teodorović’s best achievements, on which his precise drawing fully reveals. Although he was under the great influence of classicism, the artist did not renounce the Baroque-Rocaille forms.