Church of the Ascension of Our Lord Jesus Christ in Dub

Cultural and historical heritage in Bosnia and Herzegovina/Bosna i Hercegovina – E75
Photographies: 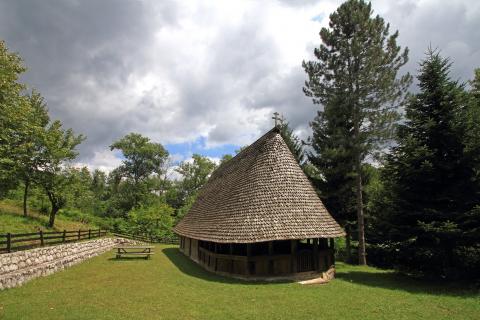 Description:
According to tradition, the Church of the Ascension of the Christ in Dub, near the town of Bajina Bašta, was erected in 1792, whereas there is a record in a chronicle that the Church was renewed in 1828. The temple seems to have been erected on the foundations of an older house of prayer. The log church in Dub is one of our biggest and most beautiful churches of this type. It was built from massive planks, with the pentagonal sanctuary apse and the subsequently added deep porch. The porch is closed in the lower part, whereas the arched openings of the upper part are finished with profiled planks. The high dominant roof is covered with tinier and lighter small planks (klis). From the point of view of the architectural skill and the treatment of the details, of which the carvings on the door, the doorframe and the door lintel, as well as the pieces of furniture (wooden standing banners and the candelabrum), the temple of Dub is the most representative example of the log church of the type of construction built by Osaćani builders. In the Dub sacristy, which consists of as many as 17 icons, special attention should be paid to the imperial entrance door, made in the late 17th century and probably relocated here from a church of an older date. The door is performed according to the best traditions of Serbian mediaeval wood engraving; today, however, both the wood engravings and the painted parts of the door are quite damaged today. A few icons – including the two alter icons – are the works of the Russian provenance of the first decades of the 19th century, without any more significant visual values.