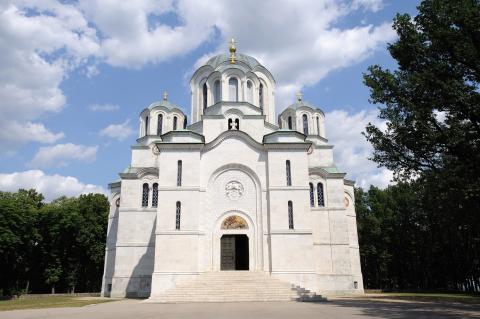 www.oplenac.rs
Description:
This memorial whole on Oplenac, near Topola, comprises the remains of the fort with the tower, the Church of the Nativity of the Most Holy Mother of God, built in 1811, the residence and the monument to Karadjordje, as well as the mausoleum with the Church of St. George, the legacy of King Peter I Karadjordjević, constructed between 1910 and 1912. The Church of St. George, designed on the projects of arch. Kosta Jovanović, is so monumental owing to the fact that there was an intention for the church to be the mausoleum of the Karadjordjević family. It is a cross-shaped church, with three semi-circular apses at the northern, the eastern and the southern ends of the cross, and the narthex. It is a five-dome church – the four domes at the ends of the cross, and the fifth, bigger, above the place of their intersection. The façades are coated with white marble from Venčac mountain and the two cordon cornices divide them into three parts. Particular attention was paid to the western front, which is dominated by Paja Jovanović’s mosaic presentation of the patron of the church. The portal and the windows are decorated with decorative plastics in the style of the Moravian intertwining. The works on the construction of the church ended during the rule of King Alexander in 1930, when the naos and the crypt, spreading under the whole surface of the naos, where decorated with the magnificent mosaic compositions performed on the model of the most representative examples of Serbian mediaeval painting. The equipping of the interiority was entrusted to arch. Nikola Krasnov. The floor made from polished marble of different colors gives a special impression of magnificence and richness. In the church, there are two sarcophaguses – the one of St. Peter’s in the northern chorists’ space and the other of Karadjordje’s, the founder of the Karadjordjević Dynasty, in the southern. Mausoleum of the Serbian Royal Family Kraljice Marije 4, 34310 Topola tel: +381 (0)34 811-280