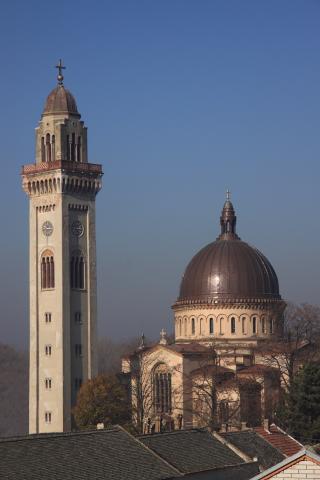 Description:
The Temple of the Transfiguration of Our Lord was constructed between 1873 and 1878, in the place where there had been a church since as early as 1717. It was built according to the concept of the neo-Byzantine style. The wall painting decorating the interiority of the church, with the dominating historical themes, was done by Stevan Aleksić. The iconostasis, performed according to the design by Milorad Ruvidić and Branko Tanazević, was painted by Uroš Predić in 1910, in the spirit of academic realism. The church’s library at the Temple of the Transfiguration of Our Lord in Pančevo town is a valuable library, with rare and the oldest books in these territories of ours, some of which date back in the late 16th and the early 17th centuries, with over 10,000 titles. The Church of the Holy Transfiguration is a protected cultural good – a monument of exceptional significance.