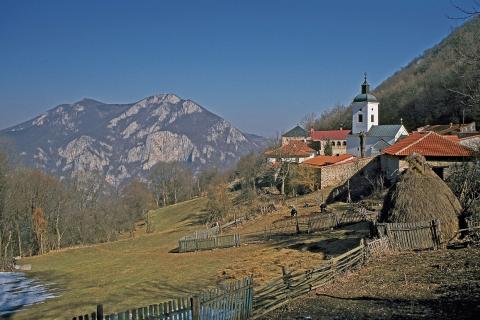 Description:
The Monastery Sretenje was raised on the hilltop of Mount Ovčar, in exceptional environment. According to the research work done so far, it is believed that the Monastery was raised in XVI century, when it was mentioned. However, the first written mention of the monastery moves the time of its erection back by a few decades, even a century. The monastery was burnt down and ruined on several occasions in the past. It was restored thanks to the monk named Nikifor Maksimović, who later became the Bishop. The Monastery has the iconostasis made of stone, the only one in all Ovčar Kabalar monasteries. Some manuscripts were preserved here and antiquities and forged object are kept as a Marble baptismal font and rossete dating from the XVII century and the icon of Holy Mother of God, from the XVIII century.