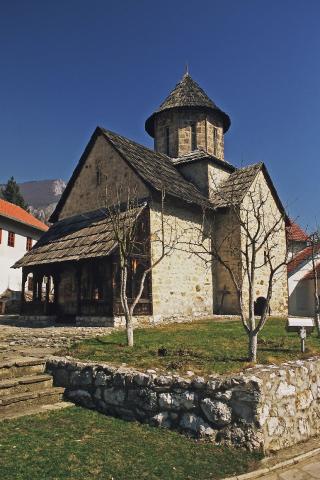 Description:
BLAGOVEŠTENJE Monastery is situated on a hilltop of Mount Kablar, above Ovčar Banja Spa. It is one of the very few monasteries in the gorge that we know when the monastery was built and who its founders were. The inscription over the entrance to the church shows that the church was raised in 1601/02. The church was built in Raška-style in architecture and it is one of the most beautiful monasteries in the Ovčar Kablar Gorge, surpassed only by Sveta Trojica. Monastery of Blagoveštenje contains one of the most significant iconostasis in Serbian art dating back to the first half of the XVII century, dominating with its exceptionally designed engravings and painted decorations in representative church interior. Blagoveštenje frescoes, including representation of St. George and Prince Lazar in the nartex, still rank among the highest achievements in Serbian fresco painting of the first half of XVII century.
Audio record: