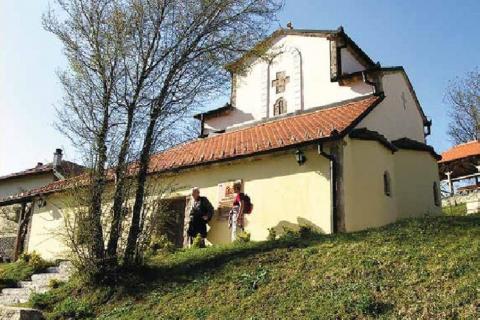 Description:
USPENJE Monastery was erected above Jovanje Monastery and can be seen from all sides of the gorge. The first mention of it was in the Turkish records in 1536. When Vuk Karadžić visited the monastery in 1820. he wrote down about remains of a round tower located on a raised land and the traditions relating to this object: ''several monasteries on the hill have the walls of a kind a tower, which is now called Gradina and it is said that Jovanje Monastery used to be laura, from where other monasteries around Mount Ovčar and Kablar received orders and judgments and used to have bell on the tower (where books were written) and a celing under the copying room." On the end of XX century, the church was completely rebuilt and though it has never been fresco painted, a new iconostasis has been made.